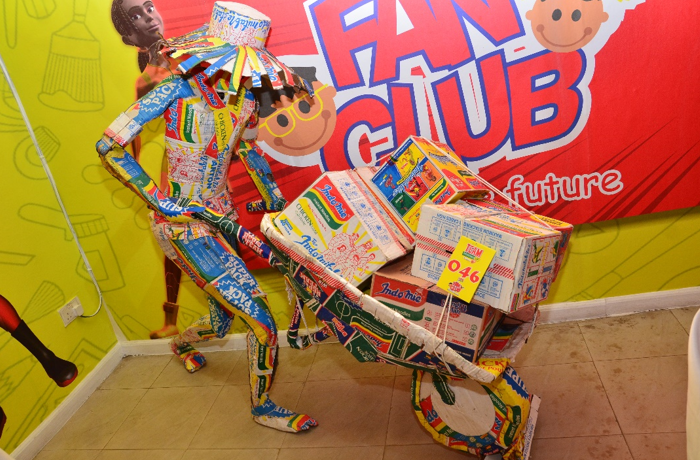 An array of remarkable creativities were on display at the National Museum, Onikan in Lagos recently as Dufil Prima Foods, makers of Nigeria’s number one noodles brand – Indomie Instant Noodles showcased and rewarded winners of the Indomie Fan Club (IFC), ‘Team Yourself Up’ Competition Season 6 for their show of ingenuity.

‘Team Yourself Up’ Competition is one of the many ways the Indomie brand engages and nurtures creativity in thousands of Nigerian children by providing a platform for them to express their creative talents and abilities.

Several members of the Indomie Fan Club exhibited their special works during the Special Arts and Crafts Exhibition of the ‘Indomie Team Yourself Up’ competition, as kids between the ages of 5 to 12 years from various schools across the country had their unique creatives made from wrappers, cartons or both of their favourite Indomie noodles displayed to stand the chance of being rewarded with several exciting prizes.

Speaking at the exhibition/prize presentation in Lagos, the Group Corporate Communications and Event Manager, Dufil Prima Foods Plc, Mr. Tope Ashiwaju stated that the brand through the ‘Team Yourself Up’ competition is leveraging the platform to create a bonding and engaging experience between children and their loved ones.

According to him, “It is part of our responsibility and core values to engage the children in activities that will aid their mental and physical development. The competition also provides a platform for these kids to express their creative abilities and have loads of fun while doing so with their families.”

In her welcome address, the National Coordinator, Indomie Fan Club, Faith Joshua, expressed satisfaction with the level of participation the competition recorded. According to her, “the ‘Indomie Team Yourself Up’ competition Season 6 was a huge success considering the number of entries received within one month that the competition lasted.”

“‘Indomie Team Yourself Up’ competition was designed to boost the confidence of kids in their innate ability and also afford them a platform to express their creativity. We received over 40,000 entries of several unique works nationwide, and today’s event is therefore meant to display these numerous works to the public and also allow for the selection of the best works through a voting system.”

She added that part of the underlying principle the competition was designed to inculcate in the kids is the importance of collaboration, division of labour and the enormous strength in Nigeria’s diversity as the kids were required to work in groups with anyone they felt could bring their ideas to reality; noting that the outstanding products were borne from a combination of hard work and joint work.”

After the vote cast for the top 100 entries received, the grand prize reward of N500,000 went to Master Lawal Oluwadarasimi Treasure from Bold Child Montessori School, Lagos. Ucheama Aleria Kamdilichukwu won the 1st runner-up position with the sum of N100, 000 while Jesufemi Paul and Ezenwa Chibuike Godswill won the 2nd and 3rd runner-up positions with the sum of N75,000 and N50,0000 respectively.

Four regional winners also got N35,000 each in the competition. They are Adewusi Josiah (Best in Lagos), AbdulAzeez Rofiat (Best in Ogun), Tedrick Chinda (Best in Abuja), and Ezindu Oforbuike (Best in the East).

The Indomie Fan Club is an initiative of Dufil Prima Foods, makers of Nigeria’s number 1 noodles brand – Indomie Instant Noodles. The club was founded in July 2005 to create a fun environment of learning, excitement, and bonding for children between the ages of 5 and 12. With well over 100,000 members spread across different parts of Nigeria, the club has grown to become a phenomenon.

It is worthy to note that some of the artworks on display at the exhibition ground were auctioned and the proceeds raised will be donated to Little Saints Orphanage Home for the education of their children.

Also, certificates were issued out to all the 40,000 participants who sent in their entries. While the 100 top entries got five cartons of Indomie instant noodles for their participation.

‘If you try to be smart around me, the bitch inside me comes out’ Actress Kemi Afolabi blows hot