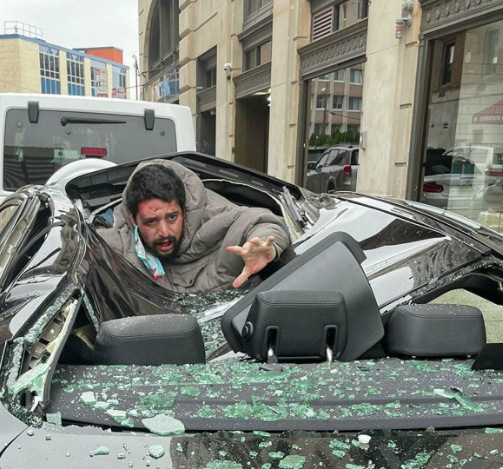 Man survives fall from ninth floor of a building then stands and asks bystander ‘what happened?’ (video)

A man survived after falling from a New Jersey high-rise on Wednesday morning, October 6.

The 31-year-old man plunged nine stories down before landing in the chassis of a BMW.

The building he fell from

The car cushioned his landing, the New York Post reports, and helped him survive.

When bystanders approached following the fall, they noticed he was still alive.

He then stood up in the wreckage of the car, raised his right arm, and asked the bystanders, “What happened?”

Christina Smith, who witnessed the fall, called 911 for assistance for the man, who did not work in the building and has since refused to give his identity to police.

He remains in critical condition at a nearby hospital.

Smith said, “I heard a big boom and I didn’t think it was a person at first. The back window of the car just busted out—exploded. Then the guy jumped up and started screaming. His arm was all twisted.”

Mark Bordeaux, who also saw the fall, told the Post: “He kept saying, ‘Leave me alone, I want to die.’ You saw one of his arms was clearly broken, but he was conscious, he was moving.”

Nick Cannon admits his ex-wife, Mariah Carey is still mad at him for ‘breaking her rules’