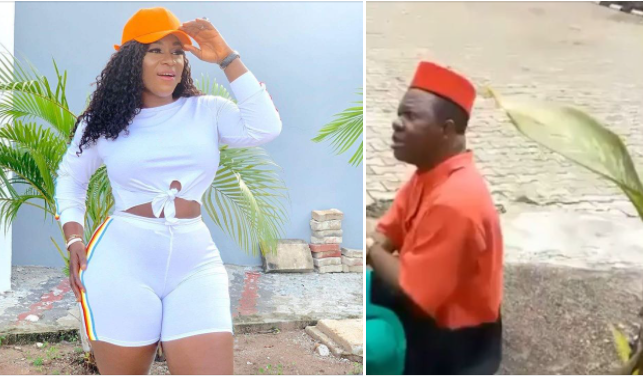 What sort of embarrassment is this, he is not the cause of your problem

Actress Destiny Etiko has reacted to a video of veteran actor Chinwetalu Agu sitting on floor and explaining himself to soldiers, after being arrested at Upper Iweka in Onitsha, Anambra state yesterday October 7.

Chinwetalu Agu in the video stated that what he was wearing is a civil dress and not a Biafran regalia. He also said he was sharing bread and was not campaigning for proscribed IPOB or ESN when he was arrested, before being led into one of the offices at the army division.

Etiko who reacted to the video, queried the embarassment the veteran actor is being subjected to. Calling for Chinwetalu Agu to be freed, she also maintained that he is not the cause of the problem witnessed in the country.

WHAT SORT OF EMBARRASSMENT IS NA THIS

HE IS NOT THE CAUSE OF YOUR PROBLEMS