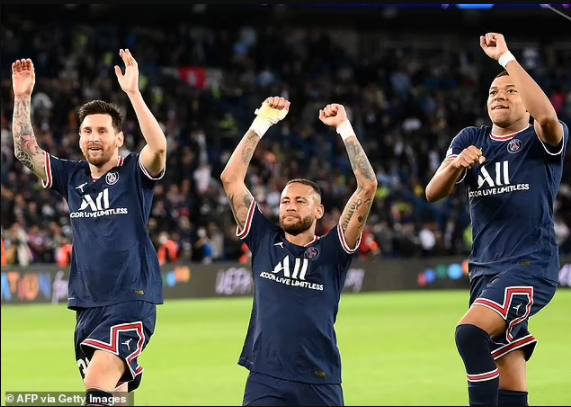 Lionel Messi has revealed that he would vote for his Paris Saint-Germain team-mates Neymar or Kylian Mbappe for the Ballon d’Or, despite being one of the favourite to win the award for a seventh time.

The trio alongside fellow teammate goalkeeper Gianluigi Donnarumma are among the 30-players shortlisted for the men’s award.

The prestigious prize, given to the best footballer of the year returns this year having been cancelled last year due to the coronavirus pandemic.

Messi, 34, is the favourite to scoop the top prize ahead of the likes of Robert Lewandowski and Jorginho in the bookmakers’ odds.  But the Argentine has admitted that he would vote for his new team-mates Mbappe and Neymar.

‘Obviously I have two players in my team that I would vote for, Ney and Kylian,’ Messi told L’Equipe via RMC Sport.

‘Afterwards, there are players at the individual level who have had a great season, like Lewandowski, Benzema,’ he added. ‘But it’s hard to say because what you have done at the collective level means a lot to win the Golden Ball.

‘Lately, the titles have a lot of weight, if you won the Champions League, the Euro, the Copa America.

‘I think in previous years, we looked more for the player of the year, the best player. But now the titles also have a lot of weight.’

‘Don’t strip her of that innocence we saw a month ago’ Reno Omokri blows hot, reacts to 17-year-old hawker, Salle’s new look

I have failed you many times – Mike Bamiloye openly begs wife, Gloria for forgiveness