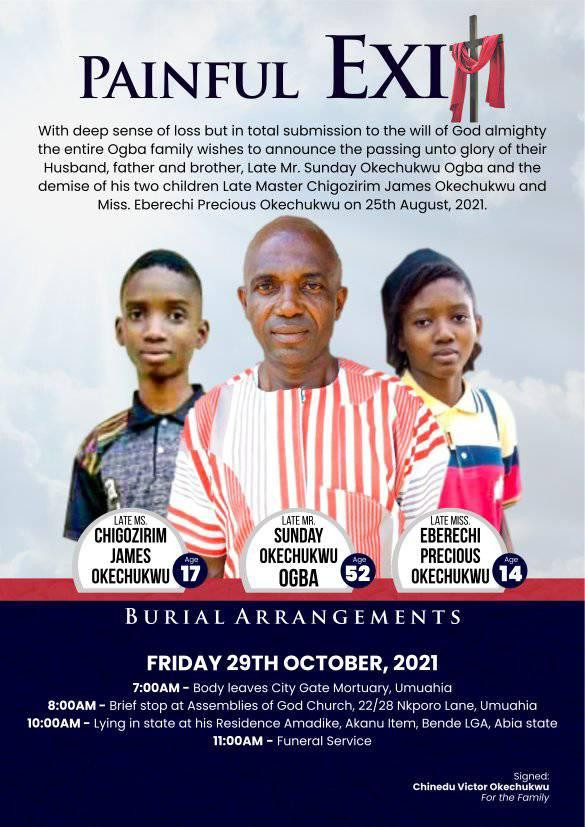 Mr Sunday Okechukwu Ogba, who died along with two of his children and four others after eating suya with fruit juice in Umuahia, is set to be buried on October 29.

Ogba, 52, and his two children, Chigozirim, 17, and Eberechi, 14, would all be laid to rest in their home town, Amadike, Akanu Item in Bende local government area of Abia State.

The four children of his friend, Chibuzor Ikwunze, had been spending their third term holiday in his home at Umueze Ibeku, Umuahia North LGA when the incident happened.

On Tuesday, August, 24, 2021, Ogba bought the packs of fruit juice and suya to entertain his guests and family but soon after seven persons including Ogba and his children died. Only his wife and another daughter survived.

The daughter that survived said her father brought the Suya and three packets of Juice out of which one was given to Ikunze’s kids to share, the other was given to her siblings to share while the late Sunday consumed the remaining one with his wife.

“She said that after consuming the Suya and Fruit Juice, Sunday’s children requested for boiled yam which was cooked and equally consumed with red oil by the entire household.

They later started complaining of dizziness and then began to commit. Few hours later, they were discoverd dead.

According to the burial arrangement announced by the deceased’s son, Chinedu Victor Okechukwu on behalf of the family, the bodies will leave the mortuary on the same day and have a brief stopover at Assemblies of God Church, Nkporo Lane, Umuahia.

A funeral service will be held in their honour at 11 am after which they will be laid to rest at their Amadike, Akanu Item residence.

Chinedu also mourned his sister, Eberechi, who would have turned 15 today, October 10.

“We are meant to be celebrating your birthday today .but see how the whole thing turned out. Keep Resting nne” he wrote.

‘The man left you in 2018, and I met him two years after’ Ehi Ogbebor blasts wife of her new man