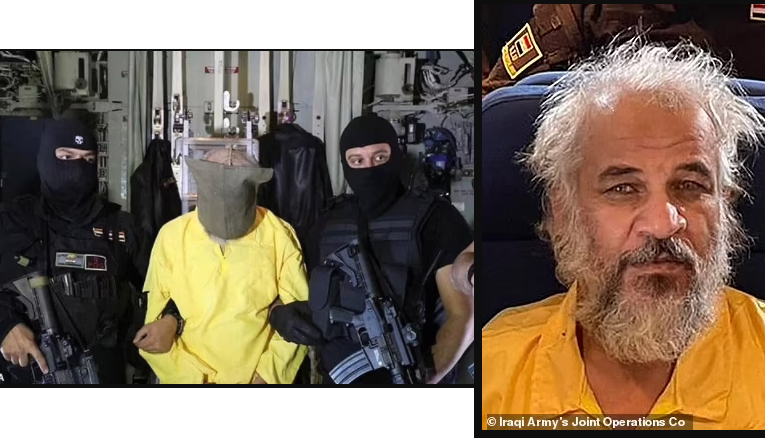 Iraq has captured the alleged finance chief and second in command of the Islamic State group, who had $5million US bounty on his head

Sami Jasim al-Jaburi, the suspected former deputy to the late IS leader Abu Bakr al-Baghdadi, was arrested ‘in Turkey’, according to a senior Iraqi military source cited by AFP news agency.

Iraq’s Prime Minister Mustafa al-Kadhemi announced the arrest on Monday, but did not specify the location, saying on Twitter Jaburi was captured in a ‘complex external operation’.

He did not give further details of the operation, but described it as ‘one of the most difficult’ cross border intelligence operations ever conducted by Iraqi forces.

The US Rewards for Justice programme said Jaburi within IS had ‘reportedly served as the equivalent of… finance minister, supervising the group’s revenue-generating operations from illicit sales of oil, gas, antiquities and minerals’.

The programme’s website describes Jasim as having been ‘instrumental in managing finances for IS terrorist operations.

‘While serving as IS deputy in southern Mosul in 2014, Jasim reportedly served as the equivalent of IS’s finance minister, supervising the group’s revenue-generating operations from illicit sales of oil, gas, antiquities, and minerals,’ the website adds.

In September 2015, the US Treasury Department labelled Jaburi as a Specially Designated Global Terrorist.

Iraqi intelligence officials, who spoke on condition of anonymity, told The Associated Press that Jasim was detained in an identified foreign country and transported to Iraq few days ago.

Jassem worked in Iraq with al-Qaida leader Abu Musab al-Zarqawi, a Jordanian militant who was killed in a U.S. airstrike in Iraq in 2006.