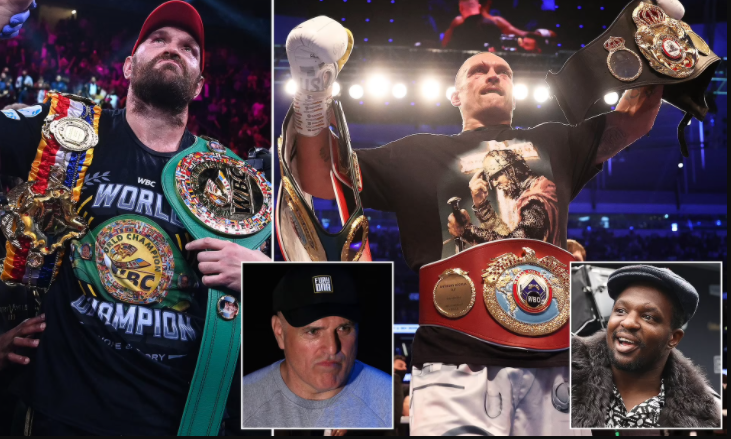 Tyson Fury’s father has told the Gypsy King to fight Ukrainian Oleksandr Usyk next and shun other fighters who are ‘not in his class’, like Dillian Whyte.

Fury defeated arch-rival Deontay Wilder in Saturday night’s trilogy fight in Las Vegas in a thrilling encounter which saw the Gypsy King floored twice by his opponent in round four, before he went on to seal the in the11th round.

The Briton has now retained his WBC and Ring Magazine title. But his father John has insisted that Usyk, who beat Anthony Joshua in London last month – is the only one he should fight next.

Defeating Usyk would make Fury the undisputed heavyweight champion of the world with the WBA, IBF, WBO and IBO titles which the Ukrainian took off Joshua in September.

‘He’s got to go for Usyk or nothing in my idea. It’s Usyk next or nothing,’ he told talkSPORT. ‘I wouldn’t bother with the rest of them, they’re not in Tyson’s class.

‘Would Dillian Whyte deal with Deontay Wilder? No. So why would you want to put him in with my son and get him knocked out?

‘At the end of the day, he just got knocked out by a 42-year-old man (Alexander Povetkin) via a slap by the back of his hand.

‘Tyson can’t get up for them kind of fights. He wouldn’t raise his game for that fight as he’s not big enough. And then he goes in there with a lacklustre attitude and you don’t see the best of Tyson.

‘You only see the best of Tyson when he’s against the best. A challenge like he had (against Wilder) and it was a great fight. For me, I told him: Usyk or don’t bother.’