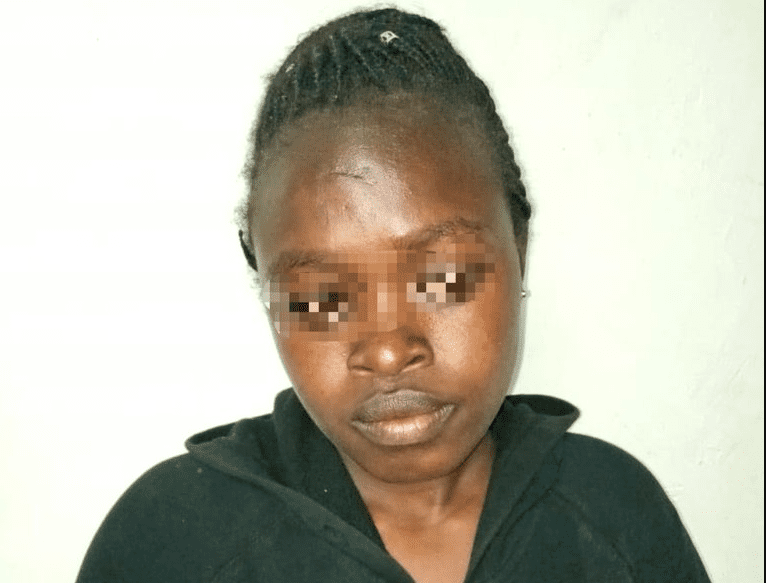 Police have arrested a nanny who attacked her employer’s family and killed their 7-year-old son in Marigat, Baringo County, Kenya.

The suspect, Lydiah Jelagat Kipng’etich, 24, also seriously injured the boy’s mother during the attack on the night of September 24, 2021.

The Directorate of Criminal Investigations (DCI) in a statement on Monday, October 11, said the suspect had been working for the family as a nanny before allegedly committing the heinous act.

Preliminary investigations by DCI revealed that on the fateful night, the suspect sneaked into her employer’s master bedroom and attacked her with a panga and rungu.

“Armed with a panga and a rungu, the 24-year-old house help who had been graciously offered a nanny’s job in the home of a Rumuruti based prison warder, crept stealthily into the master bedroom of her employer in the dead of the night, heinously attacking her in her sleep,” DCI said in the statement.

According to the DCI, the man of the house was away on work-related duties when the suspect attacked the boy before aiming for the mother (her employer) before escaping from the scene of the crime.

“As she raised distress calls amidst excrutiating pain with blood oozing from her arms, head and neck, the woman knew not that her 7-yr-old first born son had been the first target of the househelp from hell. With the man of the house away on duty, the killer nanny had found a perfect time to strike his family.

“As thunderstruck neighbours thronged the scene to the victims’ rescue, Lydiah escaped in the cover of darkness

“It was in the process of getting the woman ready for hospital that the neighbours stumbled upon the boy’s cold body hidden under the bed. He had some blood oozing from the mouth, with no physical injuries.

“As the injured victim was being treated at Nyandarua County and Referral Hospital where the boy’s body was also preserved for autopsy, a manhunt for the suspect commenced

“Over the weekend, a joint team of Crime Research and Intelligence Bureau detectives from DCI Headquarters and Baringo County, joined their DCI Marigat counterparts in the pursuit, where scrupulous search was conducted in Kiptangwanyi and Kongasis areas of Gilgil, Nakuru County.

Days later, detectives working on the case caught up with the suspect at a friend’s place in Kongasis and arrested her.

“After hours of engaging detectives in a cat and mouse activity, the slippery suspect was flushed out of her friend’s house in Kongasis and escorted to Marigat Police Station awaiting arraignment at Kabarnet Law Courts tomorrow.” the statement concludes.

‘I don’t give a f*ck as far as my diction does not affect my bank account’ Reality Tv star, Ka3na replies critics