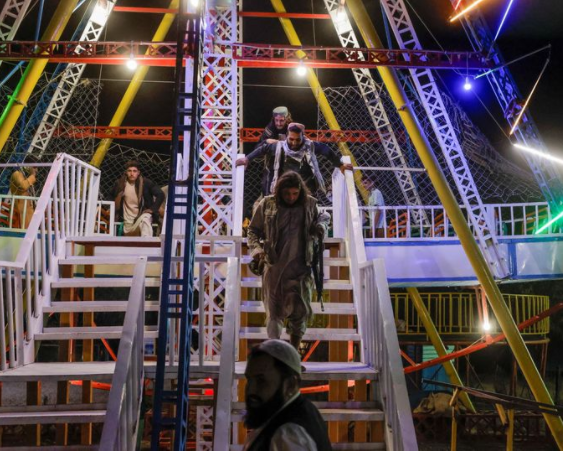 Taliban fighters were seen enjoying themselves at an amusement park in Kabul, Afghanistan, while Muslims were blown to pieces in a mosque.

On Friday, October 8, as more than 50 people were killed and even more critically injured in a bomb attack on a Shi’ite mosque in the Afghan city of Kunduz, Taliban fighters, who are now in charge of the country’s affairs and have replaced the army and police, were seen arriving an amusement park on trucks to enjoy themselves.

Groups with large machine guns strapped across their chests swung back-and-forth on a giant pirate ship ride and played on a carousel.

Some were spotted shamelessly joking with friends as they ate sweets. Young children were also seen laughing and playing with them.

In one photo a fighter can be seen on the banks of the Qargha reservoir next to the park, brazenly posing for his snap. He stood in front of the park’s glowing lights as if to make it look like he had a halo.

The attack on the mosque was claimed by ISIS-K, a rival terror group that are still besieging the country.