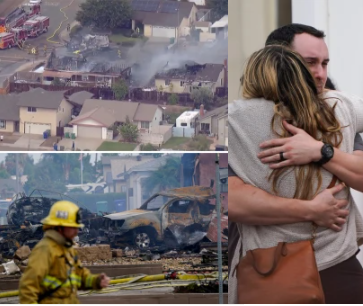 A plane crashed into a UPS truck a few blocks from a high school in the San Diego, California area, killing at least two people.

The two-engine aircraft had been told by an air traffic controller to gain altitude just before it crashed into the truck and two houses on Monday, October 11.

An explosion from the impact killed the driver and injured two other people, who were hospitalized. Their injuries were not immediately confirmed, but local reports said they suffered burns.

Officials in the hours after the crash did not know how many people were aboard the small plane but said they think the injuries were “non-survivable”, said Santee Fire Department Battalion Chief Justin Matsushita, according to FOX 5.

“We do have multiple confirmed fatalities, we do not know exactly how many,” said Justin Matsushita, deputy fire chief for the city of Santee, in a briefing for reporters. “We do know there are at least two confirmed.”

Matsushita said emergency responders are searching for casualties as they determine the extent of damage to homes.

“Not to be too graphic, but it’s a pretty brutal scene for our guys, and we’re trying to comb through it,” he said.

Images from the scene showed plumes of smoke billowing into the air near Santana High School, which is located about 20 miles northeast of San Diego at 9915 North Magnolia Avenue.

Santa High School in the midafternoon tweeted: “All Students are Secure. There was a plane crash 2 or 3 blocks away. We are currently in a ‘Secure Campus.'”

According to a statement from UPS, an employee was killed.

“We are heartbroken by the loss of our employee, and extend our deepest condolences to his family and friends,” UPS said. “We also send our condolences for the other individuals who are involved in this incident, and their families and friends.”

Two homes in the San Diego County neighborhood took the brunt of the plane’s impact and two or three more were damaged. The scene was still smoldering hours after the crash.

A fire from the crash completely destroyed at least one building, NBC 7 reported. Several buildings close by also had damages from the fire.

One home was “well involved” by flames and a second residence was also ablaze, Santee Fire Chief John Garlow said.

The sheriff’s department requested that residents stay away from the area as first responders worked the scene.

A San Diego County spokesperson said the aircraft was a Cessna 340A and that it was traveling from Yuma, Arizona, to Montgomery Gibbs Executive Airport in Kearny Mesa.

“I’ll stand by you till de.ath” – Hushpuppi’s friend writes, as he celebrates him on his 39th birthday