A Nigerian man has in details narrated how his friend narrowly but bravely escaped from the hands of kidnappers who disguised as policemen in Lagos.

Facebook user, Isaac Fayose took to his page some hours ago, to apprise his followers on why they should be extra careful when dealing with so-called policemen as he narrated how his friend who was returning home was almost kidnapped by fake policemen. 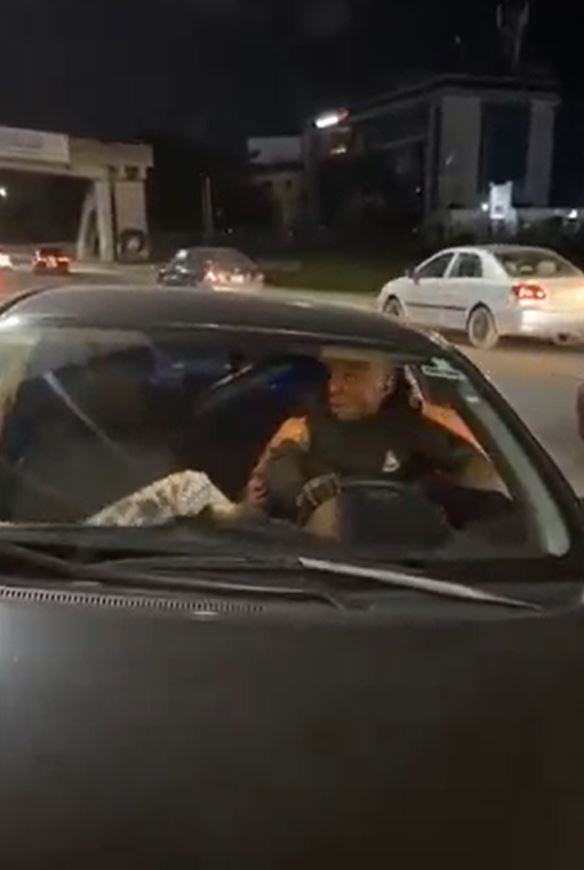 He gave the narrative in details while also sharing a moment from when his friend escaped from the kidnappers. Read what he shared as you scroll,

Pseudo-Police Kidnappers: A narrow escape!
Take a look at the pictures and watch the video you see below. A friend’s nephew had an ugly scary encounter with some pseudo-policemen at Lekki a few days ago. Let’s call him SO.
Last Friday night at 11pm, he was on his way home. Having just passed Legacy house, just by Konga house, he was stopped by these men who were donned in some sort of black police attire wearing these police caps that you see in this pix and beaming these flashlights in the pix at him to stop his car. As the civil citizen that he felt he was, he stopped thinking it was some sort of Police check that they were conducting. There was a black car parked by the side of the road that had some of their comrades by it. Two of these pseudo-police guys approached his car and asked for his papers. He showed them. Then they asked to check his boot. He flipped open the boot but they insisted that he should come out and follow them to the boot so they could inspect it. He obliged. Still thinking nothing was amiss. He had only his laptop bag in his car-boot anyway. Afterwards, they told him to follow them to the police station. He asked why but they shouted him down. Trying not to cause trouble, he obliged. When they now asked him to give him car keys that they would rather drive, he began to sense that something was amiss. Still, these men were about five or more surrounding him. So he released the keys and sat gunshot with the guy in front while another guy enter the car and sat behind. They signalled to the other guys to follow them in the other black car.
At this point, SO knew that these men were up to something sinister. He felt that dread that crept into your spine when your life is in danger. Now his brain was in overdrive. His adrenaline was at its zenith. What to do? What to do? His survival instincts kicked in.
Just then they were approaching a street with about over 7 men standing by the side. A white car was slowing down and coming from the opposite direction. He knew then, it was now or never. He grabbed the steering and swung it sharply to the left ensuring he bashed the oncoming white vehicle. He knew if he could bash that vehicle had enough to make it stop, it would draw attention and the owner would have to stop and the usual road melee would happen. That quick thinking on his part saved his life. Immediately he crashed into the vehicle, the guy at the back panicked, leaving behind his flashlight and face cap, he opened the door and dashed off. The black car following behind sped away without a backward glance.
He now had to wrestle with the guy in front that you see in that video. That is SO in grey trousers, using all his strength to lock the guy with his legs around his neck. Some men standing by the roadside now came to his rescue and that is how they caught the guy and carried him to the police station.
We were simply transfixed listening to the telling of his story. The person who recorded this video was the owner of the car he bashed. All I can say on his behalf is thank you Jesus. I am just glad he didn’t sustain any bodily harm But the trauma of that day is not something one can easily shake off. You all must be careful with these so-called police stops at night or even at noon. Whatever you do, never step out of your car at night on a lonely street where so-called police guys are doing so-called car particulars inspection. It is just another kidnapping strategy they use these days to grab their next victim. SO said he remembered reading that the chance of surviving in a car crash is better than when you’ve been kidnapped and taken to their den. Readers beware! 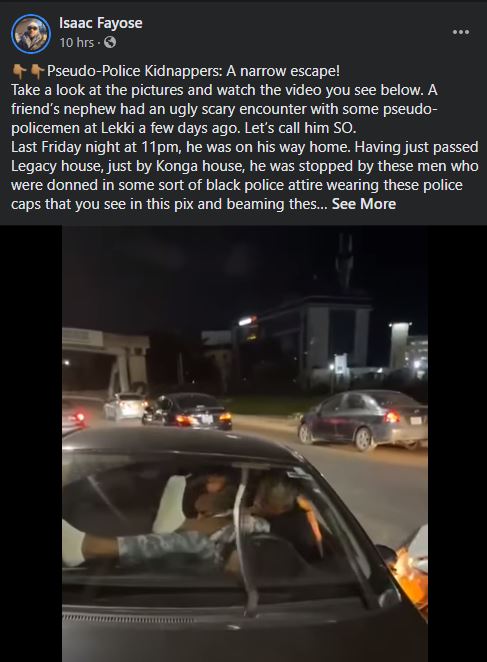 Watch the video he shared,

Sex tape allegation: You can’t be begging me behind the scene to save your marriage and then come with a petition. See you in court