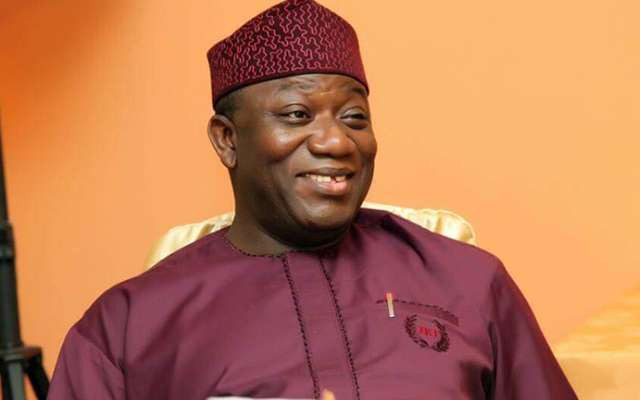 Corps members can be recruited to fight insecurity, those not willing to join the military services can serve in their community without pay

Governor Kayode Fayemi has said that Corps members should be recruited to fight insecurity in the country.

In his speech at Ibadan, Oyo state capital on Tuesday October 11, the Governor said  a minimum of 200,000 security personnel is needed to “quickly bring the current wave of insecurity to a halt”.

Fayemi also said that corps members not willing to join the military services can serve in their community without pay.

“There are two things that we need to address quickly to bring the current wave of insecurity to a halt.

“We need to have a conversation on how we can recruit a large number of people to join the police and the military, even on a short service or otherwise.

“By available statistics, we need a minimum of 200,000 personnel to boost the fighting power of our men.

“This number is very large and a potential financial and logistic nightmare, yet we cannot delay any further.

“The ungoverned spaces need to be closed up quickly by motivated men with the singular objective to save the nation.

“That takes us to the number two issue of financing and arming large recruitment.

“With this, we can use the existing orientation camps to train willing and able graduates to reflate the security personnel under a special arrangement that will be worked out.

“That way, the fund that is currently deployed to the NYSC can be used with just some additional funding, which could be sourced through a national emergency fund for the next five to 10 years.

“Those who cannot join the military services can serve in their community without pay if we must still retain the NYSC for everyone.

“To incentivise those who may volunteer to serve, they will have a separate certificate and medal of honour in addition to having priority for military, paramilitary and civil or public service recruitment after service.”

Fayemi also called on the political class “to fashion out a new way of communicating their politics beyond the now obnoxious resort to ethnic jingoism, sectarian and divisive rhetoric”.

He stated that Nigeria needs patriots and not ethnic crisis entrepreneurs “who see everything from the prism of ethnic and religious conspiracy”.

“If your wife is beautiful but cannot pray and study the word of God, you are an endangered specie” — Footballer, Jude Ighalo’s estranged wife tells men