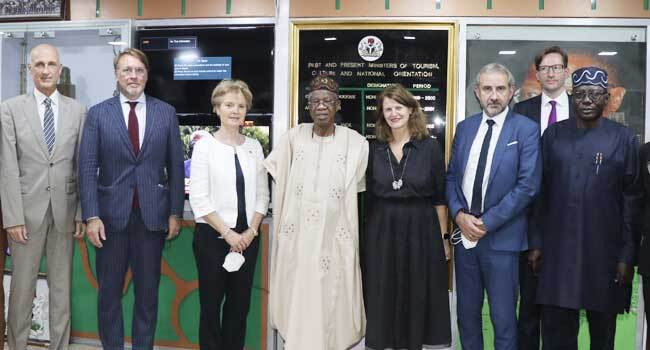 Nigeria’s Minister of Information, Lai Mohammed on Wednesday, October 13, hailed the German Government for the repatriation of Benin artefacts from the European country.

About 1,130 pieces of Benin Bronzes are expected to be returned to Nigeria next year, after Germany decided to willingly return the items, taken during the slave trade era.

On Wednesday, Lai Mohammed, received the German government delegation that came to Nigeria for the signing of the Memorandum of Understanding.

Members of the German delegation included the Director of the Museum at Rothenbaum, Prof. Barbara Plankensteiner; President of the Prussian Cultural Heritage Foundation, Prof. Hermann Parzinger and the German Ambassador to Nigeria, Birgitt Ory.

According to a statement issued by Segun Adeyemi, the spokesman of the Minister, Mohammed said the MoU “marked the beginning of efforts that will culminate in the signing, in December 2021, of the agreement on the repatriation of the Benin Bronzes.”

He described the MoU signed between Nigeria and Germany in Abuja as a major step toward the repatriation of hundreds of Benin Bronzes from Germany next year.

“The German Government and the German people have taken a bold step by agreeing to voluntarily, without too much coercion on the part of Nigeria to return these artefacts. Because what the return of the artefacts will do is that it’s going to really cement further the relationship between Nigeria and Germany. Culture today has become one of the effective tools for soft diplomacy,” the Minister said.

“The return of the artefacts should not be an end of an era but rather the beginning of further cooperation between the two parties.”

Mohammed said a team of experts will leave Nigeria very soon to engage with stakeholders in Germany on the repatriation of the artefacts.

“A team of experts will be visiting some museum in Germany very soon and the whole idea is again confidence building to especially assuage their feeling of loss and make it lighter and easier for them and to also make their position more tenable with the people.”

In his remarks, the Director-General for Culture and Communication of the German Federal Foreign Office, Dr. Andreas Gorgen, said the release of the artefacts is part of a cultural policy that will contribute to healing the wound inflicted by the looting of the artefacts from Nigeria and to establishing a new relationship between Germany and Nigeria.