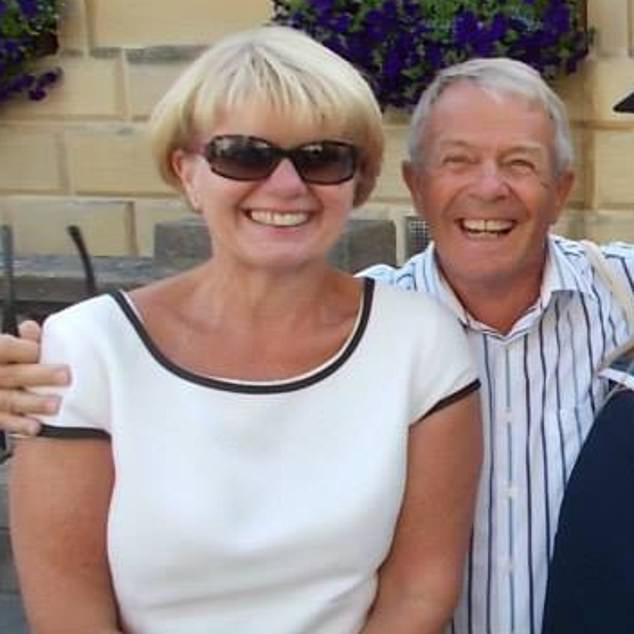 A 66 year old woman, threatened to chop off her husband’s penis before stabbing him to death following an argument over Zoom video calling app, then wrote a confession as she waited for police to arrive, a court has heard.

Penelope Jackson, stabbed David – a retired lieutenant colonel and her husband of 24 years in the kitchen of their bungalow in Berrow, Somerset, UK on February 13, 2021.

Jackson managed to call the police before losing consciousness, but the defendant took the phone from him and refused to follow the operator’s instructions to help him.

On the second day of Jackson’s murder trial at Bristol Crown Court on Tuesday, October 12, the jury heard that the 78-year-old victim had been Jackson’s fourth husband, and she his third wife.

Sheila Taylor, Jackson’s second wife, told the court her marriage to the victim had ended when he began an affair with the defendant in 1993.

Taylor told the court the victim hadn’t another affair while with the defendant. She said Penelope learnt of the affair when Jackson rang their home and demanded to speak to her husband.

She said he had been ‘white and shaking’ when he came off the call, adding: ‘He told me he had been having an affair with a woman called Penny but the relationship was now over.

‘(Jackson) didn’t want the relationship to be over and she was insisting he tell me about it and go and live with her.’

Taylor said after the defendant’s divorce from the victim had been finalised, he had told her Jackson had threatened to ‘do a Bobbit on him’ if he ever tried to leave her – reference to a high profile case in the US at around the same time where a wife had cut off her husband’s penis.

Taylor said: ‘He was very frightened. He honestly believed she was capable of carrying out that threat.’

She said that she believed her former husband ‘was afraid of Penelope’.

‘He was frightened she would destroy his army career and destroy his reputation and there’s no doubt in my mind she was capable of doing that,’ Ms Taylor added.

Mr Jackson’s daughter from his first marriage, Jane Calverley said she had never seen the couple show violence towards one another, but said the defendant had liked making people feel uncomfortable.

‘When he was with the defendant he always seemed like he was on edge.’

Ms Calverley continued: ‘I always felt everything had to revolve around Jackson, she was a very larger than life character, she would enjoy making people uncomfortable.’

She said Jackson had ‘enjoyed finding people’s sore spots and poking them’.

‘It’s hard to describe how (Jackson and the victim) interacted. It never felt comfortable.’

‘I never saw them argue, (Jackson) would just bait (the victim) – it wouldn’t result in an argument necessarily,’ she said.

She also told the jury how she stayed with Jackson and her father when she was having trouble in her marriage.

Ms Calverley said Jackson told her: ‘It’s much easier if your husband kills himself.’

The jury heard that Jackson’s third husband had taken his own life a few days after he learned of her affair with the victim.

The note read: ‘To whom it may concern, I have taken so much abuse over the years – look at my records.’

It continued: ‘But he was a good Daddy. However the mask slipped tonight. That was unforgiveable.

‘I accept my punishment, may he rot in hell.’

Jackson had apologised for her spelling in the note, and added a comment in one corner that appeared to read ‘self-defence’.

In the 18-minute call to emergency services after stabbing her husband, Jackson repeatedly acknowledged what she had done.

She then apologised for officers for ‘being a nuisance’.

The defendant continued: ‘Remorse is easy, it’s been a long time coming – I did it, I’m guilty.

‘If I was given the chance, I’d do it again, even if they locked me up for 125 million years it would still be worth it.’

Jackson added: ‘I should have walked away years ago but you don’t, I deserve everything that is coming my way because you shouldn’t do what I did.

Prosecuting, Christopher Quinlan QC said she was told the allegation had been upgraded to murder when she arrived at the police station.