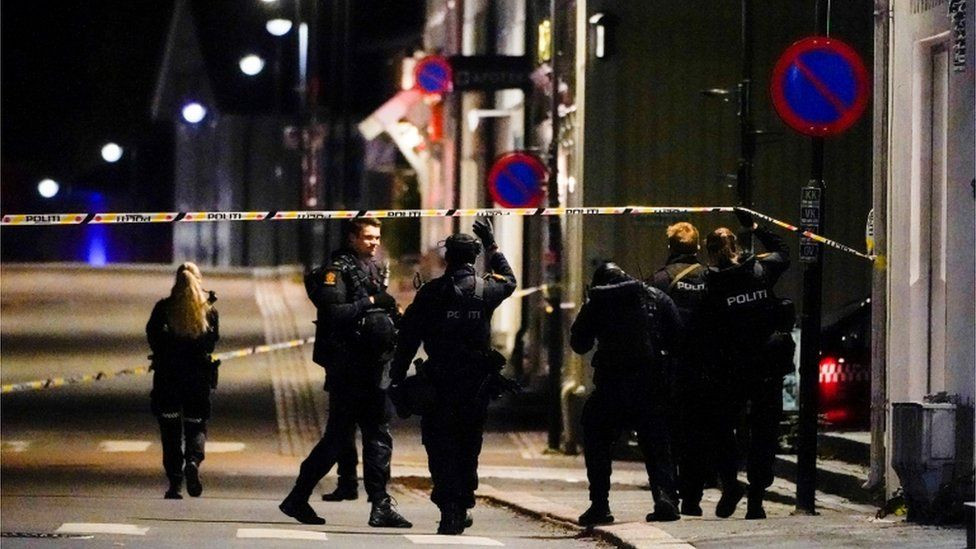 Five people have been killed and two more injured in Norway after a man used a bow and arrow to attack them.

Police believe he acted alone, and will investigate whether it was an act of terrorism, a spokesman said.

The attacker is alleged to have launched the assault inside a Coop Extra supermarket on Kongsberg’s west side. One of the people injured was an off-duty police officer who was in the shop at the time.

A spokesperson for the super market chain later confirmed a “serious incident” at their store, adding that none of their staff were physically injured.

Local police chief, Oyvind Aas confirmed that the attacker had managed to escape an initial confrontation with police before an arrest was finally made at 18:47 local time, 34 minutes after the attack began.

One witness told local outlet TV2 she had heard a commotion and seen a woman taking cover, then a “man standing on the corner with arrows in a quiver on his shoulder and a bow in his hand”.

“Afterwards, I saw people running for their lives. One of them was a woman holding a child by the hand,” she added.

Officers were also investigating whether the attacker used other weapons during the incident apart from the bow and arrow, the Kongsberg police chief told reporters.

After the attack, residents were ordered to stay indoors so authorities could examine the scene and gather evidence.

Reacting to the incident, Norwegian Prime Minister Erna Solberg said reports of the incident had been “horrifying”.

“I understand that many people are afraid, but it’s important to emphasise that the police are now in control,” she told a news conference.

Kongsberg Mayor Kari Anne Sand said it was a shocking attack that had taken place in an area where many people lived, and that a crisis team would help anyone affected.

The suspect was taken to a police station in the town of Drammen, where his defence lawyer, Fredrik Neumann, said he was questioned for more than three hours .

He added that the suspect has a Danish mother and Norwegian father.

The police prosecutor, Ann Irén Svane Mathiassen, told TV2 that the man had lived in Kongsberg for several years and was known to police. He is a Danish citizen.

Following the incident, Norway’s police directorate has ordered all officers nationwide to carry firearms as an extra precaution. Usually police in the country are not armed.

“The police have no indication so far that there is a change in the national threat level,” the directorate said in a statement (in Norwegian).

“Giving birth to our kids abroad is my biggest achievement ever” Yomi Casual thanks wife, Grace Makun, as they celebrate wedding anniversary