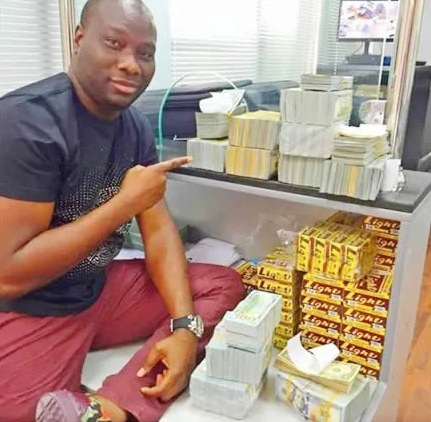 A Federal High Court sitting in Lagos has granted an order of interim forfeiture of 11 luxury items confiscated by the Economic and Financial Crimes Commission from social media celebrity Ismaila Mustapha, aka Mompha.

The items include five luxury sunglasses, five luxury wristwatches, and an iPhone8, which were seized from Mompha when he was arrested by the EFCC on October 19, 2019 at the Nnamdi AZikiwe International Airport, Abuja.

Justice Lewis Allagoa made the order on Wednesday, October 13, after hearing arguments for an ex-parte application by EFCC counsel Chinenye Ugwoke.

The judge ruled that the order subsists pending the EFCC’s investigation of the respondents in the suit, Mompha and his company Ismalob Global Investment Ltd.

Mompha, a social media celebrity, and Ismalob Global Investment have since November 25, 2019, been facing a 14-count money laundering charge to the tune of N32.9 billion before Justice Mohammed Liman of the Federal High Court (FHC) in Lagos.

The EFCC supported its application with an affidavit by an investigating officer with the anti-graft agency’s Advance Fee Fraud Section, AFF, section, Mr Bot Dachung.

Dachung stated that “the purpose of this application is to prevent the respondents from tempering and/or dissipating the properties listed in the schedule to this application which are reasonably suspected to be proceeds of unlawful activities.”

He added: “If the properties listed in the schedule to this application are not temporarily and timeously forfeited, efforts of the ongoing investigation relating to internet/cyber-related crimes and possible prosecution would be brought to a nought.”

The EFCC told the judge that the items were “found in the possession of the 1st Respondent (Mompha), which property/asset is reasonably suspected to be proceeds of unlawful activities and presently in the lawful custody of the Applicant.”

According to the agency, a preliminary investigation revealed various intelligence reports linking Mompha with chains of internet/cybercrime activities.

It further alleged that there “have been concerted ongoing investigation activities against the Respondents with respect to the 1st Respondent’s (alleged) involvement in cybercrime activities.

“The properties listed in the schedule to this application were recovered from the 1st Respondent upon his arrest by the operatives of the applicant, hence this application.

“That efforts and attempts have been made by the 1st Respondent through his legal representatives to retrieve the said properties listed in the schedule to this application.”

In a bench ruling, Justice Allagoa granted the order as prayed.

Justice Liman on October 12, 2020, dismissed Mompha’s ‘no case’ application in his case with the EFCC.

The judge held that the EFCC had established a prima facie case against Mompha, requiring him to explain himself.

Chiwetalu Agu recounts how he was treated at DSS office