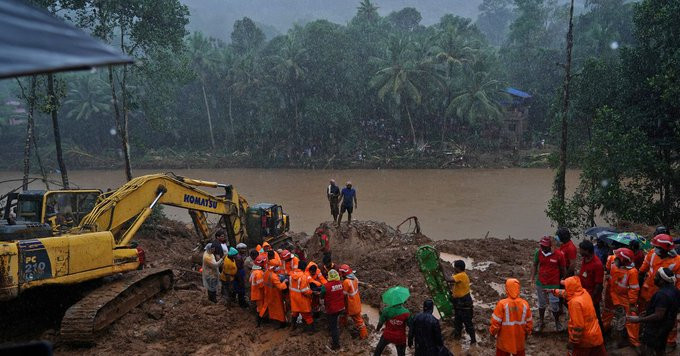 At least 24 people have been killed in floods in southern India after heavy rains caused rivers to overflow, cutting off towns and villages on Monday morning, October 18.

Several houses were washed away and people became trapped in the district of Kottayam in Kerala state.

Five children are among the dead and there are fears the death toll could rise further as many people are missing.

Video from the area showed bus passengers being rescued after their vehicle was inundated with floodwater.

As at press time, Military helicopters are being used to fly in supplies and personnel to areas where people are trapped, officials said.

Thousands of people have been evacuated and more than 100 relief camps have been set up across the state, Kerala’s chief minister Pinarayi Vijayan said

Prime Minister Narendra Modi tweeted ; “It is sad that many people have died due to the heavy rains and landslides in Kerala. My condolences to the bereaved families,” Mr Modi said.

A family of six – including a 75-year-old grandmother and three children – were confirmed dead after their home in Kottayam was swept away, news agency PTI reported.

The bodies of another three children – aged eight, seven and four – were also found buried under the debris in Idukki district.

Fishing boats are being used to evacuate survivors trapped in Kollam and other coastal towns, as sections of road have been swept away and trees uprooted.

Watch videos of the disaster below.

Billionaire businessman, Ned Nwoko replies IG user who questioned why his other wives and kids didn’t go on vacation with him, Regina Daniels and their son