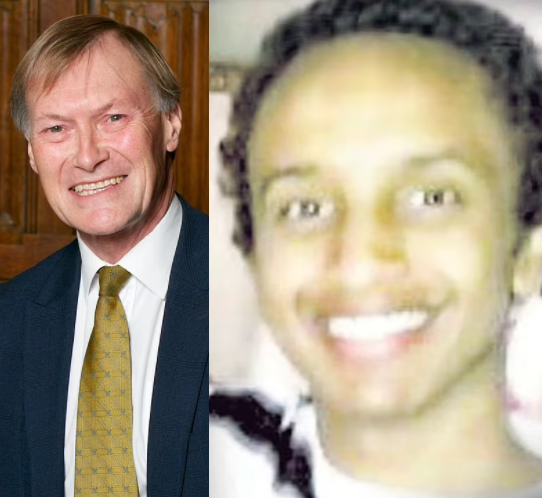 The terror suspect accused of stabbing Sir David Amess to death has been pictured for the first time.

Ali Harbi Ali, 25, is being held by police on suspicion of murdering the veteran Conservative MP as he met with his Southend West constituents on Friday afternoon, October 15.

Police and intelligence officials are still not sure about why the 69-year-old Tory politician was singled out for attack by a suspected Islamist extremist.

Reports had initially suggested that Sir David, a devout Roman Catholic and prominent Brexiteer who was MP for Southend West, had been selected because of his political views or religion.

However, investigators now believe that there may have been no specific motive for the targeting of Sir David, and that the 69-year-old was stabbed to death because his alleged killer had plotted to kill any national politician – and had succeeded in booking a face-to-face meeting with him at a church in Leigh-on-Sea on Friday.

Sources close to the investigation believe Ali may have considered killing other MPs, including Labour and Tory politicians, before picking Sir David, according to The Telegraph.

One government insider told the paper: “He was unlucky. He was not targeted because of his political party. David Amess was not specifically targeted.”

Former friends of Ali, a British national of Somali heritage who grew up in a three-bed 1980s terrace house in Croydon with his mother, two sisters and brother, claimed he was radicalised after watching YouTube videos of convicted hate preacher Anjem Choudary.

Speaking to The Sun, they claimed the videos turned Ali from a “popular pupil into an extremist”.

Separately, it emerged yesterday that the 25-year-old had been referred to Prevent, the Government’s counter-terrorism programme, several years ago – but that his behaviour was not considered to be extreme enough to alert MI5.

His referral is understood to have coincided with a deterioration in his relationship with his Somali-born parents. Ali’s parents split up when he was young and his father returned to Somalia.

One neighbour, who has known the family for twenty years, said that Ali spoke of hopes of becoming a doctor with the NHS, saying: “He told me he’d been doing exams and he seemed westernised.”

But after finishing school, Ali is alleged to have shown an interest in radical Islam and was referred to Prevent. He decided to move in with an aunt and her sons in a council house in the upmarket North London enclave of Kentish Town.

Police are also investigating the alleged close ties between Sir David and Qatar. The Tory MP was chairman of the All-Party Parliamentary Group on the Gulf state and returned from his latest visit there on Wednesday last week, October 13. The man being questioned over the stabbing is the son of Harbi Ali Kullane, a former adviser to the office of the Prime Minister of Somalia. Qatar supports the present Somali President. Security sources told The Times that all avenues were being explored in the case.

Meanwhile, detectives have been interviewing the father of murder suspect Ali at a home in North London.

One former friend, Harbi Farah, told The Sun: “I have known his dad Harbi for more than ten years. He’s a good man and this will be very upsetting for him. He’s a well-respected member of the Somali community in Britain and also in Somalia.”

Officers raided Ali’s “childhood home” in Croydon on Friday. It comes as Met Police officers were yesterday seen guarding a property in a tree-lined street in North London, where Ali is believed to currently live. Police were seen walking into the property and a blue and yellow tent was erected outside the council-owned property on the street.

Lai Mohammed can’t win election in his ward in Kwara, Lagos is his home