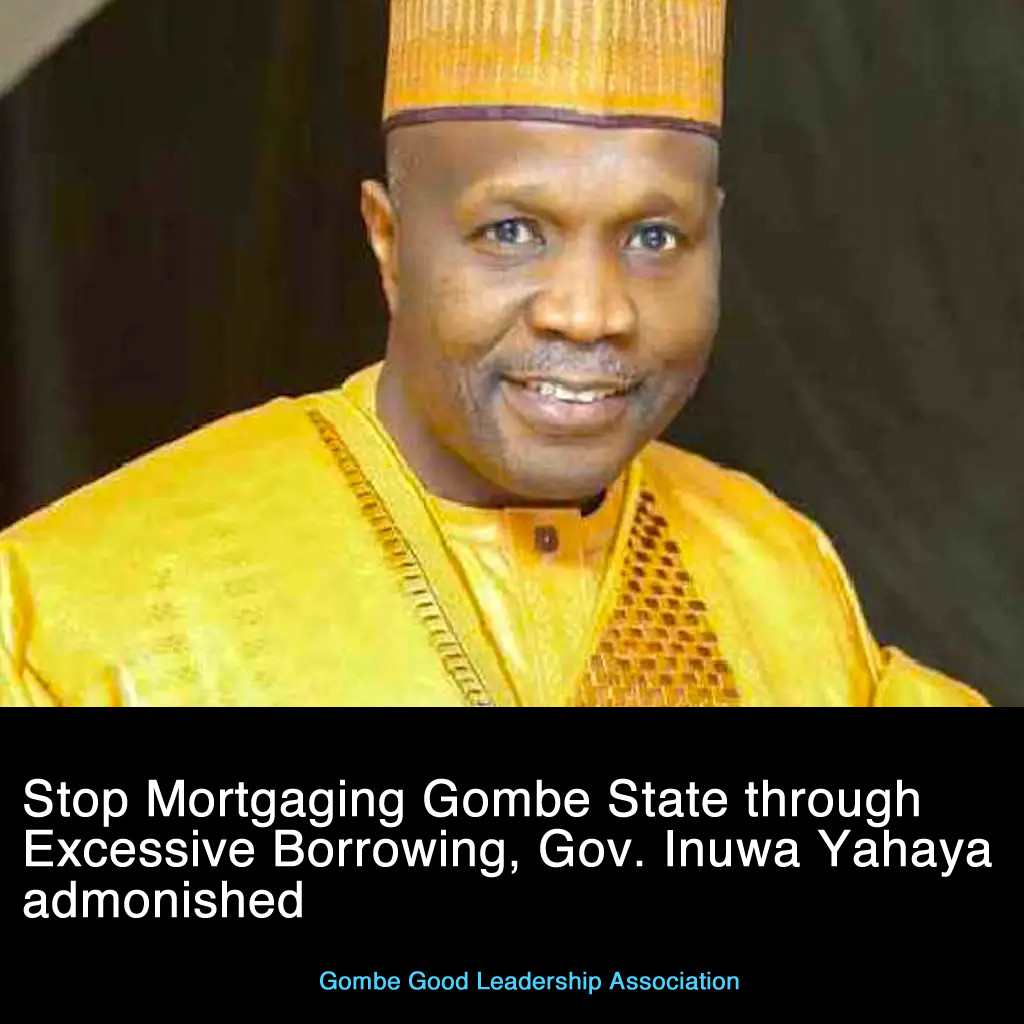 The Governor of Gombe State, Alhaji Muhammadu Inuwa Yahaya has been enjoined to stop borrowing excessively to avoid mortgaging the state through accumulated debts.

The governor, who turned 60 recently, was admonished to desist from this financial imprudence, in a call by a group named Gombe Good Leadership Association (GGLA). The call was contained in a statement titled ‘A Call To Stop The Gombe State Borrowing Governor From Mortgaging The State’, issued and signed by a Trustee of the Association, Mohammed Salisu Abdullahi.

“We have been tracking the spate of borrowing by the Muhammadu Inuwa Yahaya led Government in Gombe State and have noticed that it has borrowed well over N44 Billion in just a little over two years and yet it is embarking on obtaining another loan of N35B from the Capital Market.

Already, the Gombe State Executive Council has on 6th October 2021 given its approval for the loan and directed the Commissioner of Finance and Economic Planning “to write to the Minister of Finance to issue an ISPO of N665,605,647.90 monthly to allow deductions from State FAAC allocation in settlement of Principal and Interest accruing on the Suku through a sinking fund to be created for the purpose and the payment of the Financial Advisory”

The group also pointed out the issue of “Service Fees of 0.005% of the sum of N175,000,000.00 to Finmal Finance Services Ltd” (A company owned by Umaru Kwarianga, Chairman Gombe Investments and Property Development Company and the Campaign Manager to Governor Muhammadu Inuwa Yahaya’s 2019 Gubernatorial election).”

The group expressed concern over the spate of borrowing and added that the process was not caused by the urgent, realistic needs of the state. It added that debts should only incurred by the state for the sole purpose of fast-tracking development at a reasonable cost.

According to the GGLA statement, “What is particularly concerning to us is that these excessive borrowings that come with a crushing socioeconomic burden and impact on the state are not stimulated or urged by the urgent and realistic needs of the state. This irresponsible borrowing enthusiasm, if not checked or curbed, will end up crippling the state and subject its people to a long term of heinous and infernal economic slavery.

“The overarching condition for the justification of a State Government to borrow is the ability of the proposed project to be self-sustaining, able to repay the loan and above all is integral and vital to the State’s Fiscal and Development framework. State debts should not be acquired at the whims and pleasure of State executives but for the sole purpose of fast-tracking development at a comparatively reasonable cost.

We call on the Governor of Gombe State to, within seven days of this publication, publish in at least one national daily newspaper and one other circulating within the state details of all the debts it has procured which details should include the amounts, the purpose for such debts and their link to the development agenda of the government, Cost-Benefit Analysis showing the economic and social benefits of such borrowings, cashflow Projection to ascertain the viability and sustainability of the purpose of borrowing;

Audited financial statements for the past three consecutive years; the Appropriation Laws authorising the purposes for which the borrowings were utilised, how much that has been repaid or the plan for the repayment, the ratio of the State’s debt profile against its total revenue, the State’s Internally Generated Revenue, investments of the State (if any, Evidence of attainment and maintenance of current Credit Rating, Debt Sustainability Analyses by the DMO, Evidence of an up to date submitted to the DMO of Quarterly Domestic Debt Data, and Evidence of compliance with all the requirements of the Investment and Securities Act (ISA) 2007” the statement added.

The group warned all banks, which have granted loans to Gombe State to be ready to face legal action should they fail to comply with all regulatory requirements concerning such an involvement.

“We are worried that despite the borrowing of humongous sums and of course the earnings of the State from FAAC and IGR, the State is getting poorer by the day, its infrastructure, public institutions and departments are deteriorating at an accelerating rate.

The rising profiles of the Education and Health sectors of the State under the previous Governments are dimming, and no aspect of the State can be said to have been positively impacted by this borrowing Government. Indeed, the State is falling apart and the present borrowing spree is indicative of the cluelessness of Governor Yahaya and his team. The Government has on paper been awarding contracts but we state boldly that the reality on the ground is not reflective of such contracts”.

Security operatives gun down bandits, set their camp on fire in Kaduna