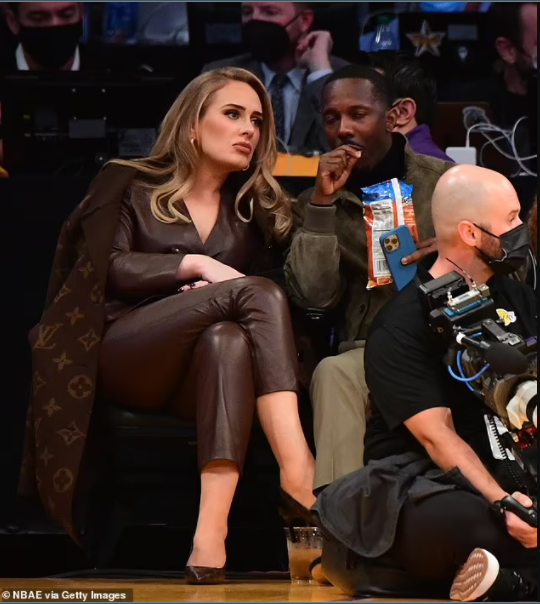 Adele looked as stunning as ever as she joined her new man, Rich Paul, for a date night at the Staples Center in Los Angeles on Tuesday October 19, where they watched the Golden State Warriors beat the LA Lakers 121-114.

The 33-year-old British singer and the 39-year-old sports agent – who have been linked since May, sat courtside for the NBA season opening game.

For the outing, Adele slipped her trim figure into a pair of skintight brown vinyl trousers and a matching top with a plunging neckline. She also rocked a coordinating a brown Louis Vuitton coat featuring the luxury brand’s famous monogram and a pair of black pointed flats.

Adele’s man, who sat comfortable beside her wocked a green zip-up jacket, a black turtleneck, and some grey pants.

The couple’s outing came after Adele gushed about her new boyfriend in an interview with British Vogue, saying that the pair are ‘very happy’ and that Rich isn’t ‘frazzled’ by her huge, global fame.

She also told American Vogue  that Rich ‘just incredibly arrived’ days before her estranged father passed away. (Her dad Mark Evans died from cancer aged 57 in May this year, after falling out in 2011.)

Earlier this year in March, Adele finalized her divorce with ex-husband Simon Konecki, 46, after nearly two years of marriage. The pair share nine-year-old son Angelo together.