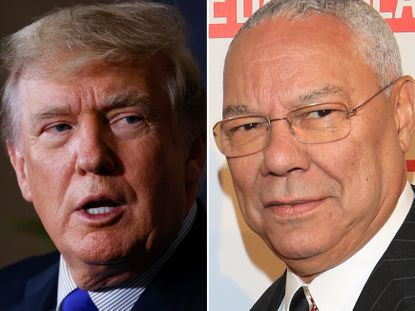 ‘He made plenty of mistakes, but anyway, may he rest in peace!”

Former US President, Donald Trump has derided former US Secretary of State, Gen. Colin Powell in death, calling him a turncoat who “made plenty of mistakes.”

Powell, 84, died on Monday of COVID-19 complications despite being fully vaccinated. He was battling multiple myeloma, a blood plasma cancer that can cripple the immune system, leaving him vulnerable to the deadly virus.

A lifelong Republican, Powell apparently annoyed Trump by endorsing Democrats in recent presidential elections as the GOP swung hard to the right. The retired statesman also once slammed Trump as unfit for the White House.

Trump in a statement, used Powell’s death to remind his supporters that the general was a prominent architect of the bloody U.S. war in Iraq, which Trump strongly opposed.

Years later after the war, Powell admitted his false claims about Saddam Hussein’s weapons programs, calling it a “blot” on his career.

Despite the unanimous chorus of praise for the soldier and diplomat, by Democrats and Republicans and Trump’s deputy Mike Pence, Trump slammed Powell on Tuesday as a “classic RINO,” or Republican in name only, “if even that.”

“He was….always the first to attack other Republicans,” Trump said in an email message. “He made plenty of mistakes, but anyway, may he rest in peace!”

He sarcastically noted that it was “wonderful” to see the media treat Powell with reverence despite his missteps, especially his checkered role in the launching of the second war with Iraq.

“Hope that happens to me someday,” Trump wrote.

“You will grow to be greater than me Amen” – Davido prays for his son, Ifeanyi on his 2nd birthday.