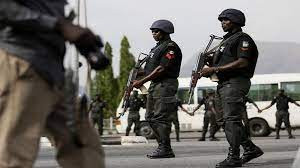 The Imo state police command says the police and other security agents were not informed of a proposed meeting of Traditional Rulers in Njaba LGA before gunmen attacked the meeting venue and killed two monarchs on Tuesday, October 19. Read the initial report here.

The command made this known in a statement signed by its spokesman CSP Mike Abattam.

According to Abattam, the police at about 3pm got a tipoff that hoodlums ”suspected to be members of the proscribed IPOB/ESN” are attacking the venue where the Transitional Chairman of Njaba LGA was holding a meeting with some Transitional Rulers.

He said the state Commissioner of Police immediately dispatched the command’s tactical teams to the scene and on their arrival at the scene, they were informed by the police patrol teams patrolling the area that the hoodlums fled into the bush on sighting them.

“At the scene, it was revealed that the Transitional Chairman of Njaba LGA Mr Emeka Ihenacho invited and was having meeting with fifteen Traditional Rulers of Njaba communities without informing the police or other security agencies.

He added that the police station in the community was recently attacked and raised down by hoodlums and that during the attack, two police officers lost their lives. He mentioned that the command had to post Policemen to the area on vehicular patrols to help in checkmating crimes and criminalities until when a new police station will be rebuilt.

He added that the command is exploring all avenues possible to see that the fleeing bandits are arrested and prosecuted.