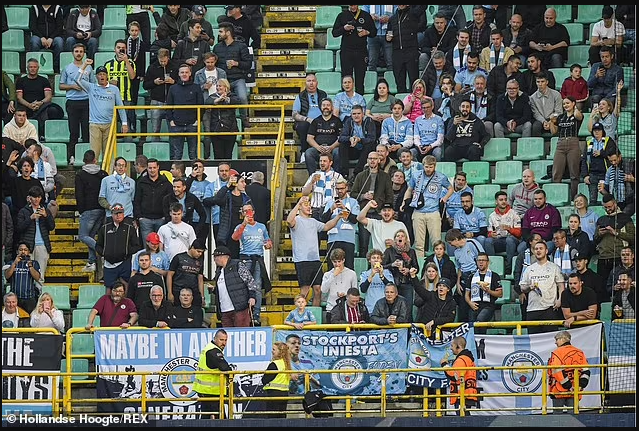 Man City fan, 63, fighting for his life in a coma after being ‘left for dead’ in attack by Club Brugge fans after Champions League game

A Manchester City fan is currently  fighting for his life after an attack by Club Brugge fans following Tuesday night’s Champions League clash.

The 63-year-old Belgian, who is part of City supporters’ group called Blue Moon Belgium, was attacked at a service station while on his way back from watching the 5-1 drubbing by the English side at the Jan Breydel Stadium in Bruges.

The fan, named locally as Guido, had his scarf ripped from his neck and when he went to retrieve it he received a ‘heavy blow to the head,’ according to his son Jurgen.

Guido was rushed in a coma to the nearby AZ Maria Middelares hospital in Ghent, according to Belgian paper Het Laatste Nieuws.

Jurgen, who is co-chair of the supporters’ club, wrote on its Facebook page: ‘My father was the victim of a cowardly attack for his City scarf at a stopover in Drugen. We hope the perpetrators are found and punished.

‘We have been everywhere in England and the rest of Europe, never aggression. We come to Belgium once and you will be left for dead.

Jurgen explained that his father was waiting for two friends when he was confronted.

He said Guido was approached by a Brugge supporter and the City scarf was taken from him.

‘When my dad asked for his scarf back, he received a heavy blow to the head, after which the perpetrators fled and left my dad for dead,’ Jurgen told HLN.

Brugge said they are ‘horrified’ by the attack and ‘strongly disapproves’ of the behaviour from their fans.

‘Club Brugge was horrified to learn of the events at the E40 motorway parking lot in Drongen where a Manchester City supporter, who had previously been a guest at the Jan Breydel Stadium, was attacked,’ they said.

‘Club Brugge strongly disapproves of all criminal behaviour both inside and outside the stadium and puts tolerance first. Our thoughts go out to the family and friends of the Manchester City supporter.’

A Manchester City statement added: ‘Everyone at Manchester City is shocked and saddened to hear reports of an attack on one of our supporters after the Champions League game in Bruges last night.

‘We are currently working with our counterparts at Club Brugge as well as Belgian and Greater Manchester Police to establish more information.

‘Our thoughts and best wishes go out to the family and friends of the Belgian based supporter, who remains in hospital.’

EndSARS: One year after, no evidence of killing at Lekki tollgate