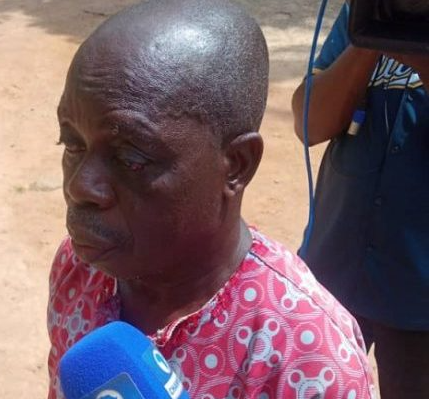 The 61-year-old pastor arrested and paraded for allegedly raping and impregnating a 16-year-old girl has been pictured.

Pastor Famakinwa Ajayi, a Pastor of the Christ Apostolic Church (CAC), is said to have raped the girl during a deliverance session in Ayede-Ogbese, Ondo state.

He allegedly deflowered the teenager in his house under the guise of performing deliverance on her before dragging her to the market square at night to sleep with her again.

While being interviewed by newsmen, Famakinwa denied the accusation but promised to take care of the pregnancy and the pregnant teen until the baby is born.

He said: “It is true that the girl and her father are my tenants. I only prayed for her when I discovered she is possessed by an evil spirit. Each time, we wanted to pray, she would start misbehaving. I did not sleep with her. I only confessed to the police that I slept with her because I was being tortured by the police. I am ready to take custody of the child.

“After birth, we will now do DNA to prove my innocence, but if it is discovered that I am responsible, I should be sent to life imprisonment.”

My father encouraged me to choose Nigeria – Ike Ugbo