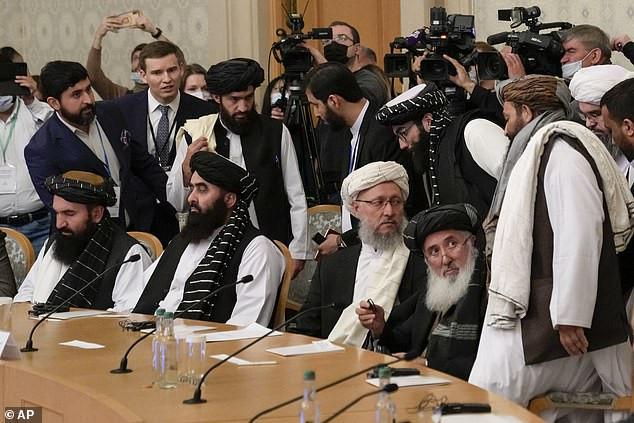 The Taliban was welcomed in Moscow today, October 20 during talks on Afghanistan as Russia seeks to exert influence over the new regime.

Russia’s Foreign Minister, Sergey Lavrov opened the talks and emphasised that ‘forming a really inclusive government fully reflecting the interests of not only all ethnic groups but all political forces of the country’ is necessary to achieve a stable peace in Afghanistan.

Russia designated the Taliban a terror organisation in 2003 and never took it off the list but has been working to improve relations with the country.

With the US now clearly out of the way, the Taliban was welcomed in Moscow today.

Unlike many other countries, Russia hasn’t evacuated its embassy in Kabul and its ambassador has maintained regular contacts with the Taliban since they took over the Afghan capital of Kabul in August.

Lavrov commended the Taliban for their efforts to stabilise the military-political situation in the country and ensure the operation of state structures.

‘We are satisfied with the level of practical interaction with Afghan authorities, which allows to effectively ensure the security of Russian citizens in Afghanistan and the unimpeded operation of our embassy in Kabul,’ Lavrov said in his opening speech.

Lavrov then added that Russia would soon dispatch a shipment of humanitarian aid to Afghanistan.

Zamir Kabulov, the Kremlin envoy on Afghanistan who also attended the meeting, said the international recognition of the Taliban depends on the inclusiveness of their government and their human rights record.

My life changed on this day for worse – DJ Switch speaks on anniversary of 20:10:20

“This sapa go reach everybody” – Cubana Chiefpriest reacts to photo of ex-Ekiti State governor, Fayose on a bike