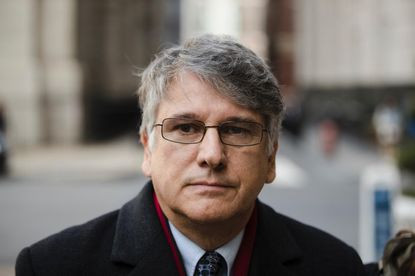 A former neurologist at Mount Sinai Beth Israel Hospital in New York was arrested and federally indicted on charges he hooked chronically ill patients on addictive opioids and withheld them unless the women submitted to his abuse.

“Cruciani prescribed significant quantities of opioids to victims and required victims to return for in-person appointments or visits to obtain prescription refills,” the indictment says.

Cruciani “knew that the victims suffered from severe if not excruciating and debilitating pain that significantly impacted their lives,” the feds charge.

“Most pain management doctors would not prescribe the same combinations and quantities of pain medication as Cruciani.”

Cruciani, 63, of Wynnewood, Pa., carried out the controlled abuse at hospitals, medical offices, hotels, and apartments in New York, New Jersey and Pennsylvania for at least 15 years from 2002 until 2017, according to court documents.

Cruciani pleaded guilty to indecent exposure and groping seven of his patients in Pennsylvania in 2017. Under the terms of a plea agreement, he was ordered to forfeit his medical license and register as a low-level sex offender but served no jail time.

“I’m truly sorry if I caused any harm or any pain,” said Cruciani in his only statement to the court during his 2017 guilty plea, reported the Associated Press.

Cruciani pleaded not guilty in 2018 to rape and predatory sexual assault in Manhattan Supreme Court stemming from allegations made by six of his former patients at Mount Sinai. By that point, more than 17 women had accused him of sexual abuse.

“Doctors like the defendant take an oath to do no harm. It is difficult to imagine conduct more anathema to that oath than exploiting patients’ vulnerability in order to sexually abuse them,” U.S. Attorney Damian Williams said in a statement Wednesday.

“Ricardo Cruciani’s sexual abuse involved developing personal relationships with victims to engender trust, and prescribing addictive pain medication that caused his patients to become dependent on him as he engaged in a course of increasingly abusive conduct.”

A total of 22 pending lawsuits, filed in the states where Cruciani is accused of carrying out his abuses, allege that hospital management ignored patients’ complaints and failed to communicate them to Cruciani’s future employers, allowing the abuse to continue for years.

He is now charged with five counts of enticing and inducing individuals to travel interstate to engage in illegal sexual activity related to five of his former New York patients. Each charge carries a potential 20-year federal prison sentence.