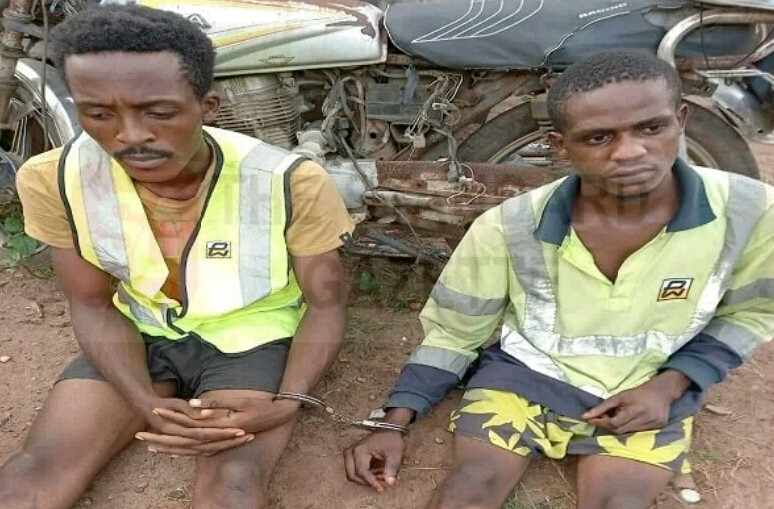 Operatives of the anti-kidnapping and cybercrime unit of the Edo State Police Command have arrested two employees of a cement company over alleged plan to kidnap their supervisors in Okpilla, Etsako East Local government of the state.

The suspects, Obi Bright and Favour Edi were arrested while trying to recruit some gunmen in Okpilla for a kidnapping operation.

The suspects, both unskilled employees of the cement company had concluded plans to abduct two of the supervisors identified as Mr Dimg alt=”Two employees arrested over alleged plan to kidnap their supervisors for ransom in Edo ” class=”img-responsive text-center” style=”margin: auto;”ba Uche and Mr Ekwueme Chukwuka before their arrests.

According to a police investigation, Bright met Edi for recruitment and sought his assistance to contact gunmen in Kogi state. They then contacted an unnamed man who was to connect them to the kidnappers.

However, trouble started as the generosity of their victims bothered the middleman who then reported the abduction plan to the soldiers guarding the company, who in turn contacted the police.

Detectives advised the whistleblower to play along to ensure that the masterminds didn’t escape.

The spspects were arrested after the soldiers gathered enough evidence of the abduction.

Other gang members were subsequently arrested by the soldiers and handed over to the Edo State police command.

Speaking to crime corrspondent, Festus Alenkhe, one of the suspects said he decided to kidnap his bosses because his monthly salary is low.

“My monthly salary is very low, and I need money to handle some issues. I know that my boss always has money, and l wanted the people l was calling to kidnap him so that they can give me my share after the kidnapping operation.” he said.

Spokesperson of the Edo State Police Command, SP Bello Kontongs, who confirmed the arrest warned criminals to relocate from Edo state as the police are now battle-ready to extinguish them from the state..

He added that the two suspects will be arraigned in court soon.