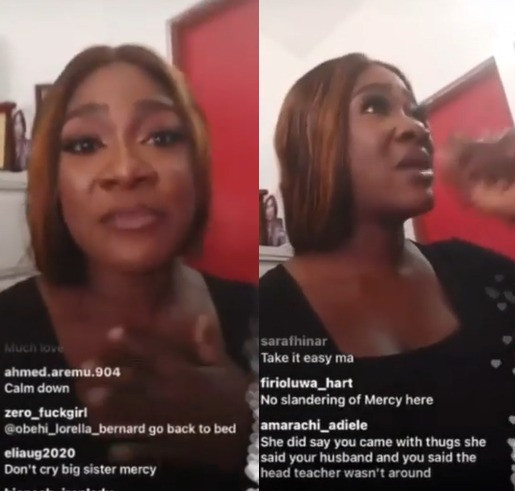 Actress Mercy Johnson Okojie has responded to claims that she stormed her daughter, Purity’s school to assault her teacher with thugs.

Recall that the Nollywood star this morning took to her Instagram page to call out a teacher in Purity’s school. Mercy in her post alleged that one of the teachers had constantly bullied Purity and even told her to her face that she doesn’t like her mother.

Mercy in her post stated that she doesn’t care if anyone doesn’t like her but passing the hatred to her child is unacceptable.

A certain lady came on Instagram to counter Mercy’s claim, stating that Mercy and her husband stormed the school to attack the headteacher because their daughter was corrected for allegedly physically attacking her classmate. Read here.

Mercy said she met with the teacher in question two weeks ago and she was very mean towards her. She said she visited the school two weeks ago and asked where the library was so she could go and pick her child. Mercy said the response she got from the teacher was disrespectful and that she mentioned it to her husband who made her understand that not everyone would like her due to the nature of her job.

Other teachers who were at the meeting also countered claims that she stormed the school with thugs to cause a scene.

Watch the video from her meeting below…