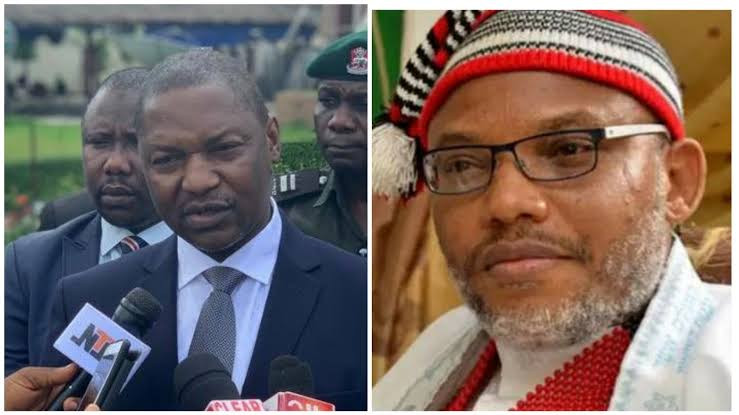 The federal government has blamed the Indigenous People of Biafra (IPOB) and its military wing, the Eastern Security Network (ESN), for some violent attacks in Lagos and other parts of the country during the October 2020 #EndSARS protest.

Attorney-General of the Federation, Abubakar Malami who spoke at a press conference today October 22, alleged that ESN was set up by Nnamdi Kanu to carry out “subversive activities” against Nigeria, and the arrested IPOB leader instigated the large scale destruction of public assets during the #EndSARS protest particularly in Lagos, as well as the South-east and South-south regions.

“The EndSARS protests of October 2020 played into the sinister plans of Nnamdi Kanu, whereby he seized the protests through subversive and inciting online broadcasts and actively commanded and directed attacks on security personnel and facilities.

“There were several IPOB/ESN attacks and destruction (arson) of public and private properties during the EndSARS and Biafra agitations across the country, especially in the South-East and South-South regions, notably the Palace of the Oba of Lagos where twelve (12) flats were completely looted and vandalized.

“The country home of the Governor of Imo State, Senator Hope Uzodinma, was burnt, over one hundred and fifty (150) buses burnt at the Lagos Bus Terminal, Sen. Ndoma Egba’s home in Calabar Municipal, Cross River State, was completely looted and vandalised.

“As a result of these broadcasts, members of IPOB attacked and killed security personnel and burnt down police stations, correctional centers, INEC offices, bus terminals, the Palace of Oba of Lagos, banks, hospitals, shopping malls and vehicles, amongst others.”

Malami further stated that the aim of the press conference was to intimate Nigerians on the findings of a presidential ad-hoc committee which was set up to investigate causes of widespread violence in Nigeria’s South-east region, following Mr Kanu’s re-arrest and repatriation from Kenya to Nigeria last June.

The AGF also claimed that some prominent Nigerians like All Progressives Congress (APC) chieftain, Ahmed Gulak,  Obi 1 of Okwudor autonomous community, Eze E. Anayochukwu Durueburuo and Eze Sampson Osunwa of Ihebineowerre autonomous community as well as Chike Akunyili, widower of the late Dora Akunyili were all killed on orders of Kanu.

“Is your child the only celebrity child in that school?” – Lady who countered Mercy Johnson’s claim, goes live to continue dragging her over school saga (Video)

Marry a team player and not a girl with high expectation