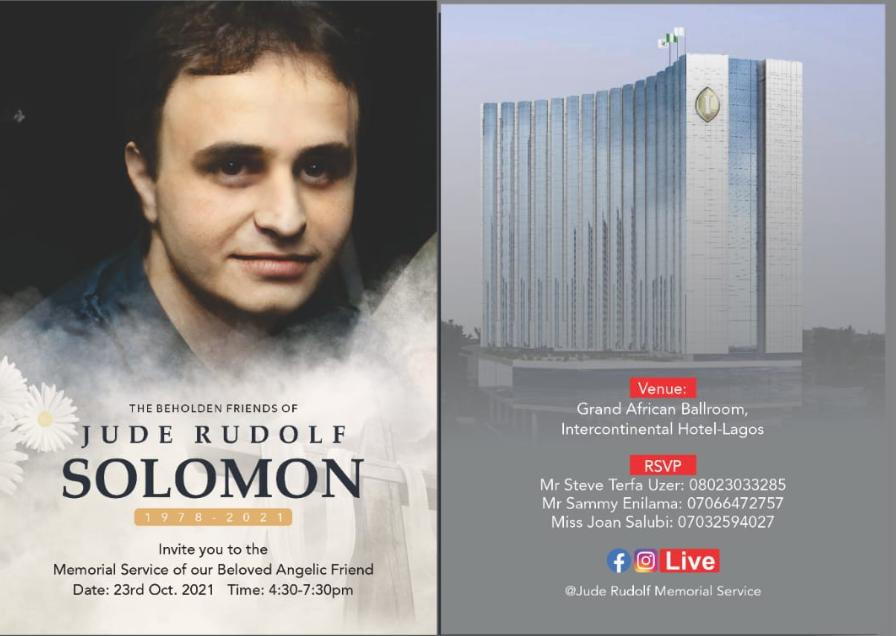 It was English Novelist George Eliot who said; “Our dead are never dead to us, until we have forgotten them”. Death is indeed the final stop for every man but what makes humans immortal is the good works they have engaged in while in flesh and blood. Their frantic efforts on earth throw them into the consciousness of many, passing their fond memories to generations unborn. For Jude Rudolf Solomon, while he was alive, he played a significant role as an astute businessman and generous philanthropist who lived life in line with the teachings of his creator.

He might have gone on a sojourn of no return but his indelible footprints will never be forgotten in a hurry. More reason the Intercontinental Hotel- Grand African ballroom, on the 23rd of October, 2021 was a location filled with rising emotions as friends and family converged in disbelief. Those who never believed the news of his shocking demise also came to clarify and also bid the jolly good fellow a farewell. With tears dropping like rainfall, the Ballroom was filled up to the brim as many sympathizers thronged in their large numbers to pay homage even in death. Eulogies and sweet testimonies of his humane side rented the air as many who have had a fair share of his generosity confessed that such a great man should not have died.

Born on the 1st November 1978 to Lebanese immigrants whose family migrated to Nigeria in 1913 and adopted Nigeria as their home country. Jude received his early education at the Lebanese International School, Lagos and proceeded to Lebanon for his tertiary studies.

After completing his tertiary education, he decided to return back to Nigeria a place where he found comfort and peace. When many of his peers thought he wasn’t making a wise decision on returning back to Nigeria, Jude saw opportunity flowing in Nigeria. He was rewarded for following his heart and intuition. That decision set him on the path of greatness laced with outstanding achievements and successes.  However, despite living a short life, his impeccable accomplishment while on earth can never be ignored with a wave of the hand. That’s why many have continued to celebrate him even in death for his selflessness, loyalty, generosity and sincerity.

Through hard work and doggedness; he was able to climb the ladder of success in life when his path crossed with the founder and chairman of Zenon Petroleum and Gas Limited, Femi Otedola. Their meeting was quite an interesting one as Jude in his usual element dazzled and swept the billionaire oil mogul off his feet with his confidence and oratory prowess and his highly cerebral presentation. Their meeting paid off when Otedola pleaded with Jude’s uncle to persuade him to work with him at Zenon Petroleum & Gas Ltd.

After Jude agreed, the rest is history. Within a short while in the company Jude proved himself to be the proverbial swizz knife. He was simply exceptional. He was multi-dimensional and vast in his approach to work and situation. He is a problem solver and a team player in his delivery and discharging of duties. This helped Zenon rise astronomically above its competitors as he also rose to the position of Head of Sales and Marketing Zenon Nigeria.

After working and building the Zenon brand for eleven years, Jude finally set forth on a new challenge in 2009. He left Zenon to pursue his interests in the energy sector and real estate development. He further transformed those seeds into a thriving business he managed successfully until he was visited and taken away by the grim reaper on 13 September 2021. He was not only successful on the business front; he was equally a dedicated family man and a lover of animals. He married his wife Maricel in May 2011 and the union was blessed with two wonderful sons – Jason and Kevin aged 9 and 7 years respectively.

When the news of his shocking demise erupted, his former boss and mentor, Femi Otedola could not hide his feelings as he put pen to paper scribbling a tribute on his encounter with the magic working marketer. Otedola averred that; “Jude was one of the finest gentlemen I have ever come across. I have known him for 22 years of his life. He worked with me for many years learning the rudiments of business He was there for me at very significant periods in my life and business. We spoke every morning, severally during the day and last thing at night. He was fiercely loyal, sincere and extremely honest right to the end. He was selfless and always thought of others before himself. He was deeply spiritual and an excellent father and husband. His dedication to family was absolute. ‘Jude, your life was a blessing, your memory a treasure, you are loved beyond words and missed beyond measure. Rest in peace beloved brother……you are now happily in Heaven with your Creator”.

“I was misinformed” — Actress Mercy Johnson’s accuser says as she apologizes.