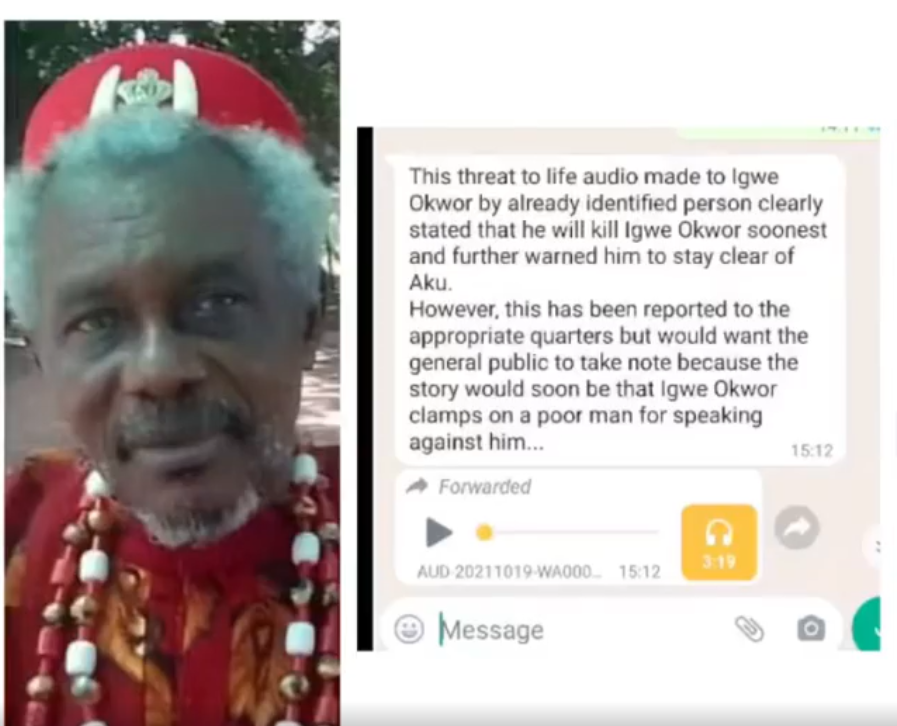 Home of suspended Enugu monarch, Igwe Christopher Okwor has allegedly been invaded again, weeks after photos and videos of damages recorded after an alleged invasion by security operatives went viral.

Family of the traditional ruler who has been in the news lately following his recent suspension by the Enugu state government over demolition of a building allegedly belonging to a visual impaired member of the community, has alleged that he has faced series of police harassment.

Gunmen suspected to be assassins were said to have invaded the traditional ruler’s Nsukka home, firing gunshots into the air on the night of Wednesday, October 19.

A member of local vigilante group on duty that night informed journalists that at about 8pm, they were alerted by one of the Igwe’s sons that their home was under attack by suspected strangers who were attempting to scale the fence. On getting close to the house, they noticed strange movement near the traditional ruler’s gate as the gunmen shot on the air and hurriedly left the area on a motor bike.

Confirming the latest invasion through a phone interview, the traditional ruler’s son Lawrence Okwor said the gunmen did not succeed that night due to the quick response of the vigilante members. He accused Barr. Nnamdi Ezemagu of trying to kill his father after failing in all his strategies including using a blind man as a ploy to grab their land, as well as numerous petitions to frame the father up and sponsoring of security agents and hoodlums to invade their home.

Prince Lawrence Okwor told journalists that Barr. Nnamdi Ezemagu wrote a petition to the Force CID Abuja, accusing his father of armed robbery, kidnapping, illegal possession of firearms and cultism but failed to appear in Abuja on the day the two parties were invited by the DIG. He said the lawyer allegedly sent a “flimsy excuse letter” that they were attending APC rally in Anambra state.

Lawrence disclosed that they have forwarded evidence of threat to the traditional ruler’s life, including an audio recording of plots against him to relevant agencies for investigations.

“We are accusing Barr Nnamdi Ezemagu of sending assassins to kill my Dad because he has always come up with a fresh attack after failing in one. Recall that he had vowed that he will be dealing with my father until he dies just because his uncle lost the Igweship to my father. We therefore call on the security operatives to investigate his activities.

” Between 6:30 to 7.00 am of 9th March 2019 during gubernatorial elections, Nnamdi Ezemagu led thugs to our village compound in Aku, beating up my siblings, broke my mother’s arm and destroyed some of our properties. A case which is now before the Ogbede magistrate Court after he, Nnamdi Ezemagu failed in his bid to truncate the matter in State CID ENUGU.

“Also on 23rd November 2020, around 10.00pm, the first invasion of our Nsukka residence by anti cult squad sent by Nnamdi Ezemagu was foiled by people who were alerted through phone calls, including the parish Priest and Catechist of Umakashi Catholic Church who rushed to our compound.

“By 3.00pm of 22nd September 2021, Nnamdi Ezemagu disguising as BBC igbo staff invaded our house with officers from the state CID.”

“The mother of all the invasions, he explained occurred at about 10:15pm of 7th october 2021, when police operatives from Force CID Abuja broke into their home and brutally attacked his parents and their visitors using a team from anti- kidnapping squad, Enugu and hoodlums, all brought by Uchenna, Nnamdi and Ifechukwu from Ezemagu’s family.

“Although the recent invasion by suspected assassins has been reported to the relevant authorities for investigations, it is important members of the public know that the life of the traditional ruler and members of his family are in serious danger and Barr Nnamdi Ezemagu and his family members should be held responsible if anything happens to any of the family members.”

Buhari to launch eNaira on Monday