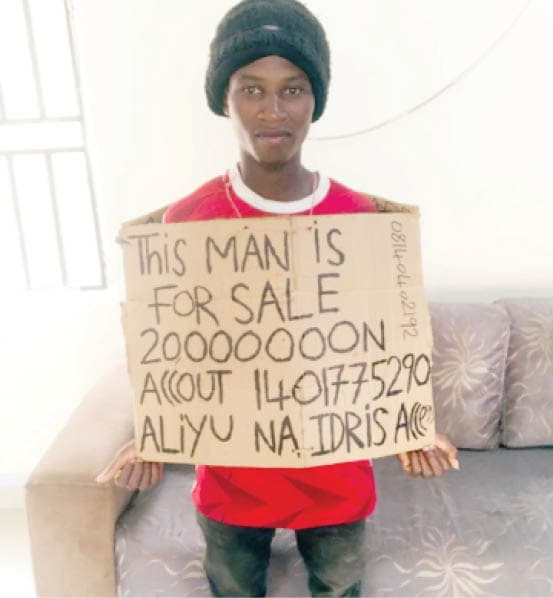 A 26-year-old man from Kaduna State identified as Aliyu Na Idris, has put up himself up for sale in Kano.

The man said to be a tailor, has reportedly been roaming the streets of Kano, carrying a placard that reads “This man is for sale for N20 million.”

The young man has been on the streets for five days looking for who will buy him and he told Daily Trust that he did that because of hardship.

He disclosed that he initially presented himself for sale in Kaduna, but moved to Kano after he couldn’t find a buyer.

“Even though many people have offered me various prices of N10m, N5m and N300,000 in Kano, I refused because the amount is less than what I expected.”

He noted that since his tailoring business failed due to the financial crisis, making him lose his customers and becoming financially handicapped, he decided to present himself for sale at N20m only because he has no other means of survival.

On what he will do with the money, Aliyu said;

“I will give my parents N10m; I will give N5m as tax to the state where I was bought, the person who helped in advertising me will be rewarded with N2m while the remaining N3m will be kept for me under the care of the person who buys me for my daily upkeep.”

Admitting that he knows he will lose his freedom if bought, he added that he is ready to face whatever comes off his decision. Aliyu also said if nobody buys him in Kano, he would move to another state to sell himself.