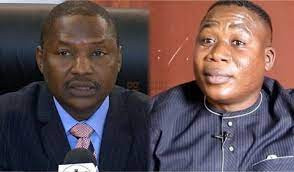 Counsel to Yoruba nation activist, Sunday Igboho, Yomi Aliiyu, has dismissed claims made by the Attorney General of the Federation, Abubakar Malami, that Igboho is being sponsored by an unnamed National Assembly member.

Recall that on Friday, October 22, Malami at a press conference alleged that Igboho is being financed by a member of the National Assembly. He however did not mention the name of the lawmaker.

In a statement released by his lawyer, Yomi Alliyu, Igboho challenged Malami to mention the lawmaker sponsoring him and also questioned the attempt to link Igboho with a Bureau de change operator, Abdullahi Umar, linked with Boko Haram financing.

“The picture the AGF wanted to paint is that our client is being financed by Abdullah Umar, allegedly involved in terrorist financing. Who is now financing who?

Does it mean that anybody buying a car from him or selling a car to him is a terrorist? I challenge the Hon AGF to mention the lawmaker that sent money to Chief Sunday Adeyemo for terrorist act whether he would not be damnified in exemplary damages for defamation”

Members of the Pan Yoruba Group, Afenifere, have also dismissed Malami’s claim. In a statement signed by its Secretary-General, Chief Sola Ebiseni, the group said the latest claims made by Malami indicated that the Federal Government is hell-bent on destroying Ighoho.