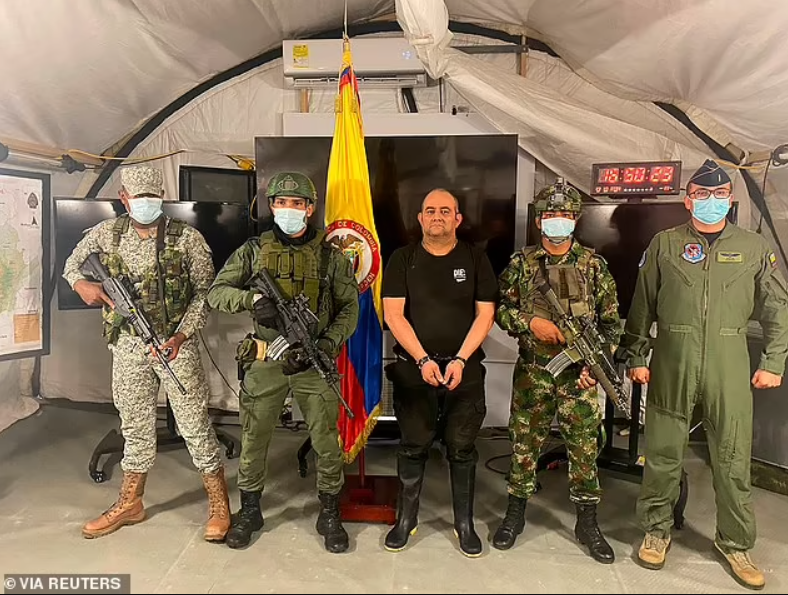 Colombia’s most-wanted drug trafficker has finally been captured after evading arrest for more than a decade.

Dairo Antonio Usuga David, known by his alias Otoniel, is accused of sending dozens of shipments of cocaine to the United States and orchestrating a ruthless drugs empire, killing police officers, recruiting minors, and sexually abusing children among other crimes.

He was arrested on Saturday October 23, in the Uraba region of Colombia when a military force of over 500 soldiers descended on his jungle hideout, marking the culmination of a decade-long manhunt dubbed operation ‘Osiris’.

Colombian President Ivan Duque likened the arrest of Otoniel, 50, to the capture three decades ago of another drug lord Pablo Escobar, who managed to evade authorities and retain his freedom for over 10 years.

This is the biggest blow against drug trafficking in our country this century,’ Duque said during a broadcast video message. ‘This blow is only comparable to the fall of Pablo Escobar in the 1990s.’

Colombia’s military presented Otoniel to the media on Saturday evening bound handcuffs and wearing rubber boots preferred by rural farmers, and he has since been transported to Bogota to await trial.

Otoniel is the alleged head of the much-feared Gulf Clan, whose army of assassins has terrorised much of northern Colombia to gain control of major cocaine smuggling routes through thick jungles north to Central America and onto the US.

The Gulf Clan has around 1,200 armed men – the majority former members of far-right paramilitary groups – and is present in 10 of Colombia’s 32 provinces.

As well as drug trafficking, the clan is involved with illegal mining according to authorities, and stands accuses of threatening and killing community leaders across the country.

Duque said Otoniel’s capture represented the end of the clan, but Colombia Risk Analysis director Sergio Guzman said a new leader would surely be waiting to take over.

‘It’s a big deal because he’s the biggest drug kingpin in Colombia,’ Guzman said, adding that the capture would not change the fundamentals of drug trafficking.

‘Otoniel is bound to be replaced.

The drug lord has long been a fixture on the US Drug Enforcement Administration’s most-wanted fugitives list, with the organisation offering a $5 million (£3.63 million) reward for his capture.

He was first indicted in 2009, in Manhattan federal court, on narcotics charges and for allegedly providing assistance to a far-right paramilitary group designated a terrorist organisation by the US government, but has eluded capture ever since amid a growing list of heinous crimes.