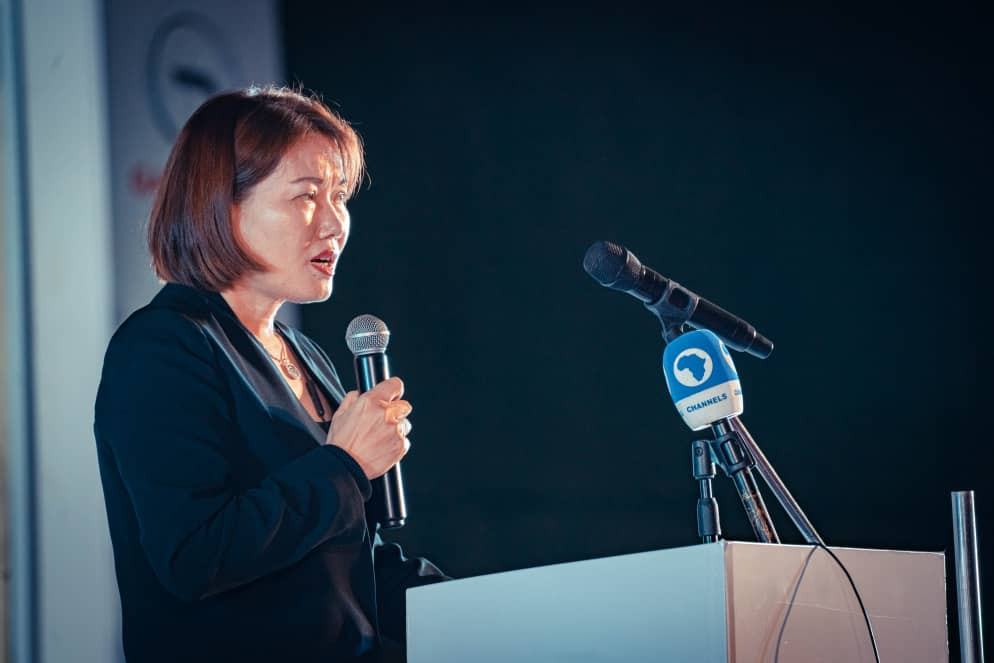 In fulfilling its promise of fostering productivity across various value chains of Nigeria’s manufacturing sector, the Guangzhou Automobile Company (GAC) took the scope of its partnership with the Manufacturers’ Association of Nigeria (MAN) a notch higher on Day 2 of its 3-day Golden Jubilee celebrations. The chairman of CIG Motors (sole distributor of GAC in Nigeria), Chief Diana Chen, was physically present to celebrate with the organization whilst going in-depth on how GAC is championing industrialization in Nigeria and the rest of the world.

The International Conference Centre, Abuja doors were open from 9 am on October 26, 2021, as guests trooped in to glimpse the recently-launched GN8 series at the GAC Motor Pavilion. Visitors were also allowed to step into the elegant minivan and feel the experience of being in the car first-hand. By 10 am, the crowd moved to the conference section to learn more about the brand’s goal for the ongoing event named after the first-ever President of MAN, Chief Adeola Odutola.

The Chairman of GAC Motors, Chief Diana Chen, started her address by congratulating MAN on its giant strides to drive industrialization in Nigeria. She reinstated GAC’s commitment to supporting MAN in driving productivity in the country and continent. In her words, “We are happy to do this partnership because we know how important Manufacturing is in the country.”

She went further to mention key steps the foremost automobile brand has taken thus far in driving industrialization in the country; from sponsoring the Nigerian Football Federation (NFF) to GAC’s continuous support to the Nigerian Police, alongside its plans to launch a world-class E-Taxi platform as part of its measures to reform Nigeria’s Transport sector.

On the GAC/MAN collaboration, Chief Chen spoke extensively about the GAC vision vis-a-vis its activities thus far in driving industrialization in Africa, primarily through the Nigeria-China bi-lateral agreement. In her words, “The partnership in Nigeria is not only a matter of business relationship, it is also for China’s commitment to driving regional developmental growth.” The crowd welcomed her comments with wide applause.

Another important highlight of prestigious repute was an evening well-spent, in the presence of the current Director-General of the World Trade Organization (WTO), Ngozi Okonjo-Iweala, who spoke on the impact of trade in driving industrialization. She explained, “For Manufacturers, Trade is also important on the import side; there’s a new and better way to import as well as competitive logistics and other services springing up.” She also explained why trade plays a pivotal role in uniting countries, driving global economic reforms, and exposing businesses to more markets. She further postulated that Africa would be wealthier if its countries traded amongst themselves rather than with other continents. In her words, “When African countries trade with each other, the goods they exchange have more value-added than the goods they send to the rest of the world.”

President of the African Development Bank (AfDB), Dr Akinwumi Adesina, gave listeners eye-openers into how this MAN event is a step in the right direction towards wealth creation within the African continent. He adjudicated that these areas must be addressed for industrialization to be achieved, as they still lack today. In proving the strength of the manufacturing industry, he recounted one of Chief Adeola Odutola’s famous sayings, “Oil will finish while industry will not.”

Next to the podium was the Secretary to the Federation’s Government, Boss Mustapha, ably representing Nigeria’s president, President Muhammadu Buhari. Boss Mustapha applauded the continued steps MAN had taken in driving industrialization in Nigeria. He reinstated the Government’s commitment to supporting MAN, where he said, “This administration remains committed to partnering with you towards churching industrialization efforts.”

Following the spirited speech from the Secretary to the Government of the Federation, guests went on break, relishing their taste buds to sumptuous meals and light refreshments. They soon had the opportunity once again to take in the sights of the GN8 as they continued from where they stopped, experiencing every feature of the vehicle, leaving no stone unturned.

As Headline sponsor to MAN’s 50th Anniversary celebration, GAC Motor has been working behind the scenes to make the program a success and drive tangible initiatives aimed at fostering local production. In one of its recent moves, the company commissioned the construction of a Car Assembling Plant in the Ogba area of Lagos State. It plans to unveil its showroom in the next couple of months.