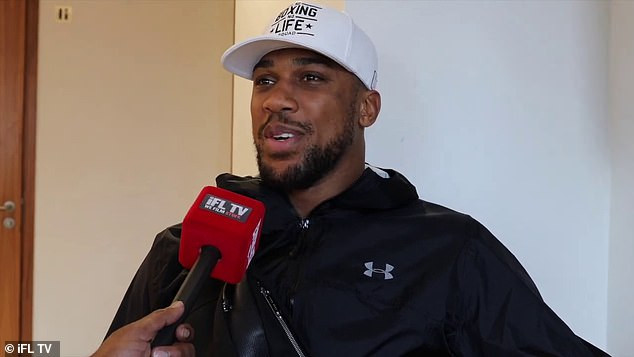 Anthony Joshua has stated he is tired of losing, a month after he lost his heavyweight titles to Oleksandr Usyk.

Joshua, 32, lost his WBA, WBO, IBF and IBO titles to the Ukrainian southpaw in September at the Tottenham Hotspur stadium, with the Briton comprehensively outclassed over 12 rounds.

AJ has activated his rematch clause and is expected to face Usyk again in March next year, with pundits and fans doubtful that the British-Nigerian boxer can refine his style in such a short space of time to avenge his defeat in north London.

Speaking to iFL TV, he said;

I’m done with f***ing losing,’ ‘I’m done with trying to learn the sweet science. The referee might get thrown on the floor in the next fight because this is war. It’s just straight war, I’m annoyed. I’m boiling up even speaking about it – it’s that passion to win.’

AJ says he wants to gain fresh perspectives after 12 years alongside his trainer Rob McCracken and is in the hint for a new coach.

‘With the new trainer situation it is funny because for 11 years I have been in Sheffield from the age of 19 to 32,’ Joshua added.

‘I just looked at myself and said I need to get out of this comfort zone, because I need a new coach to learn from as well. I will not be basing myself in the States, I am a UK resident so I am not going out to the States to find a new coach.

‘Rob’s in Lithuania so I need to find a new coach for certain points as I train ten or eleven months a year. So I need to step away and get some new teachings from trainers who have trained the likes of like thirteen or fourteen world champions.

‘I don’t need anyone that is going to make me, I am a f***ing winner but I need to get out and put myself back in the gym. In hindsight I wish I had done these things sooner, but now I can go out there and add things to my game.’

‘In ten days I went to America and wanted to narrow down the people I want to learn from. He [McCracken] has to speak to the people I may wanna work with and see if he can work with them.”

“Rob might tell me, ‘You know what champ, this ain’t working for me. For the next six months, you do your thing and come and see me after.’

“It’s mature conversations. My life, my health is on the line.”

“I need to go and get some new teachings from guys that have trained – Robert Garcia trained 13, 14 world champions,” added Joshua.

“They’ve got so many generations of teachings.

“Virgil Hunter trained Andre Ward, a phenomenal fighter. I wanted to go around and be in an environment of fighters.

“Eddy Reynoso, ‘No boxing, no life.’ I love that saying. Canelo is obviously a phenomenal fighter.

“I watched him spar 12 rounds, asked certain questions. Ronnie Shields, another African American coach who has worked with the greats.”

Charles Taylor sues Liberian government for not receiving pensions since 2003