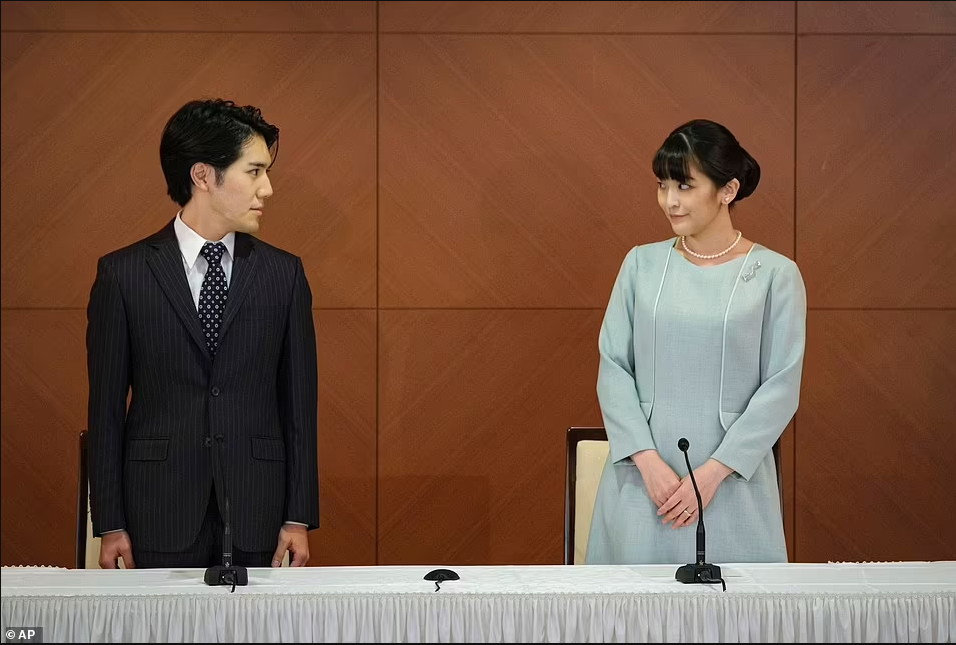 Princess Mako and her new husband are reportedly going to live together in a one-bedroom New York City apartment after she gave up her royal title and left her family’s imperial estate in Tokyo.

Mako, 30, the eldest daughter of Crown Prince Fumihito and niece of reigning Emperor Naruhito, tied the knot with university sweetheart Kei Komuro, a commoner, in Tokyo on Tuesday October 26, after an eight-year engagement.

Under Japanese law, female imperial family members forfeit their status upon marriage to a “commoner” although male members do not.

The couple are planning to move into an apartment together in Tokyo before moving to the U.S, where Komuro works as a lawyer at the New-Jersey based law firm Lowenstein Sandler LLP.

Mako, who previously lived in the imperial residence of Akasaka Estate in Tokyo, and her new husband are planning to rent a one-bedroom apartment which they would finance themselves, reports Japanese broadcaster NHK.

Mako declined the offer of 140million yen (£890,000) payment to which she was entitled for leaving the imperial family, palace officials said, and is expected to find a job in New York.

She is the first imperial family member since the Second World War to not receive the payment and chose to do so because of criticism of the marriage.

Mako and Komuro’s ceremony, which was reportedly met with protests, was held behind closed doors on Tuesday.

The princess, simply dressed in a blue frock with a bunch of white flowers, bade farewell to her parents, Crown Prince Akishino and mother Crown Princess Kiko, with a bow outside their residence at Akasaka Estate early Tuesday, before sharing a hug with sister Princess Kako, 26.

She then went to marry Komuro at a registry office, away from cameras. Afterwards, the newlyweds held a press conference in a decorated hotel function room which they paid for, in which they apologised for any distress that their union has caused.

Reading out a prepared statement, Mako defended her decision to marry, describing Kei as ‘irreplaceable’ and saying ‘our marriage is a necessary step for us to be able to protect our hearts.’ She also criticised news reports written during their engagement which she accused of spreading false information and ‘one-sided rumours’ that had left her ‘feeling sadness and pain.’ The royal household previously revealed she is suffering PTSD.

The newlyweds then bowed for the cameras before departing to start their new life, which is likely to be based in the US where Komuro is working for a law firm.

In his pre-prepared statement, Kei apologised for any distress caused but said that he loved Mako and would support her throughout their life together.

‘I love Mako. We only get one life, and I want us to spend it with the one we love,’ he said. ‘I feel very sad that Mako has been in a bad condition, mentally and physically, because of the false accusations.’

Mako and Komuro met at Tokyo’s International Christian University in 2013 and became engaged in secret, before announcing their intention to marry in September 2017.

But the wedding was delayed following a financial scandal involving an unpaid debt allegedly owed by Kei’s mother and suggestions he was marrying for money.

The dispute involves whether money his mother received from her former fiancé was a loan or a gift. Mako´s father asked Komuro to clarify, and he wrote a statement defending himself, but it is still unclear if the dispute has been fully resolved.

In the wake of the scandal, he moved to the US to study law and recently graduated from Fordham University in New York, where he now works for a law firm.

He returned to Tokyo last month before it was announced that the pair would finally wed.

As part of the announcement, the royal household said Mako would forgo all traditional ceremonies. She also surrendered a £1million payment she was entitled to according to Japanese tradition.

She is the first imperial family member since World War II to not receive the payment while marrying a commoner and chose to do so because of the criticism over her marrying a man some consider unfit for the princess.

The pair are now expected to move to the US to start a new life together.

‘There will be different kinds of difficulties as we start our new life, but we’ll walk together as we have done so in the past,’ Mako said, thanking everyone who supported the couple.