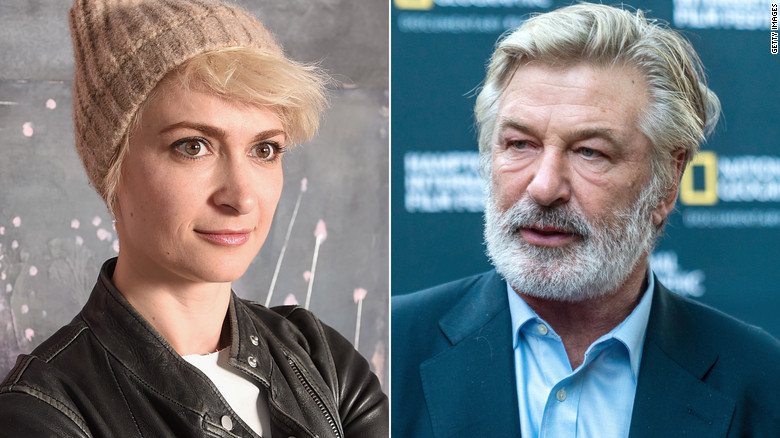 Local prosecutors have revealed that criminal charges are on the table in a fatal accidental shooting by actor Alec Baldwin on his movie set.

Legal documents have disclosed that Baldwin was drawing a gun across his body and pointing it at a camera during a rehearsal on the Santa Fe set of the film Rust when it fired, killing cinematographer Halyna Hutchins and injuring director Joel Souza.

Affidavits containing statements from Souza and camera operator Reid Russell state that Baldwin was handed a prop gun and was told it was unloaded.

It came after a crew member revealed a photo from the set was taken on the same day of the incident and shows Hutchins holding a camera while Baldwin stands in costume surrounded by crew members in the church setting.

Santa Fe County District Attorney Mary Carmack-Altwies has now revealed that criminal charges have not been ruled out, telling The New York Times that the firearm used in the incident was a ‘legit’ and ‘antique-era appropriate gun’ – not a prop.

First assistant director David Halls had earlier told crew members that the revolver being handled by Baldwin, the film’s lead actor and producer, was a ‘cold gun’, a term used by filmmakers to indicate that a prop gun is safe to use and not loaded with live ammunition.

The prosecutor added that an ‘enormous amount of bullets’ had been found on the set and an investigation was needed into the nature of that ammunition.

It follows reports that the gun the 63-year-old actor used to accidentally kill Hutchins was used by crew members to shoot at beer cans just hours before the incident.

According to an insider with knowledge of the set, several crew members on the set had taken several prop guns out the morning of the incident to go ‘plinking’ – a hobby in which people shoot at beer cans with live ammunition to pass the time.

The individual, who spoke on condition of anonymity to The Wrap, added that the round of unsanctioned target practice occurred last Thursday, just hours before Baldwin discharged one of the weapons and shot both Hutchins and Souza.

The weapon was one of three prop guns that the film’s rookie armorer, Hannah Gutierrez-Reed, 24, had set up outside the set location on a gray cart, in the desert near the city of Santa Fe.

According to search warrant executed by the Santa Fe County Sheriff’s office last week, Guttierez-Reed was the last person to handle the gun, leaving it along with the two other revolvers unattended on the cart in the early hours of October 21.

It is at this point, the insider reveals, that a group of crew members took the weapons without the director and first director’s knowledge, and forgot to unload the firearm in question.

Actor Serge Svetnoy, who was standing next to the cinematographer when she was killed during rehearsals as Baldwin practiced drawing the weapon before he accidentally fired it,  described the harrowing moment he held his friend in his arms as she lay dying while she bled over his hands.

She was shot in the chest, while director Joel Souza was also wounded, and she stumbled back before collapsing, saying: ‘I can’t feel my legs.’