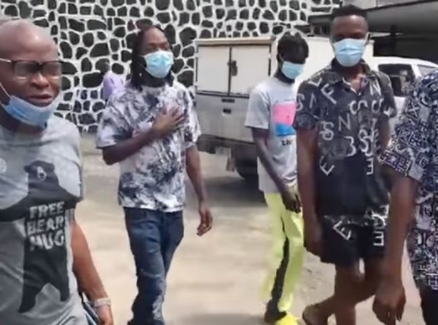 Hip-hop singer Azeez Fashola popularly known as Naira Marley, this afternoon arrived the Federal High Court, Ikoyi for the continuation of his trial before the court.

The singer is standing trial on an 11-count charge bordering on alleged money laundering and internet fraud preferred against him by the Economic and Financial Crimes Commission (EFCC).

The EFCC alleged that Naira Marley and his accomplices conspired to use different  ATM cards to defraud their victims. The EFCC also said that the defendant possessed and used counterfeit credit cards belonging to different people, with intent to defraud others.

On Tuesday, October 26, the court listened to the testimony of a second prosecution witness, Anosike Augustine, a mobile forensic expert with the Economic and Financial Crimes Commission (EFCC) after he was led in evidence by the prosecutor, Rotimi Oyedepo.

According to the witness, the Apple iPhone is a sophisticated device capable of storing a large volume of information, adding that it is the sim card that basically identifies users of applications such as WhatsApp. Read here.

The hearing was adjourned to today. Watch a video below