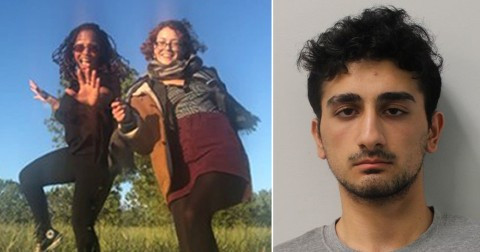 A man who murdered two sisters at random in a park has been jailed for life, with a minimum term of 35 years.

He killed them after a birthday party in a supposed “sacrifice” he claimed he believed would give him a lottery win.

Their bodies were found by Ms Smallman’s boyfriend the day after they had been reported missing to police.

The defendant, who was convicted of two counts of murder at an Old Bailey trial in July, sat facing away from the court as he was sentenced.

Jurors had heard how the teenager embarked on a “campaign of vengeance” against random women, which he apparently thought would help him win a Mega Millions Super Jackpot lottery prize of £321m.

She said: “You had found these two women. You were a stranger to them. You surprised them, you terrified them and you killed them.

“You committed these vicious attacks. You did it to kill. You did it for money and a misguided pursuit of power.”

She said Hussein had dragged the bodies away and posed them in an embrace to “defile” them in death. The judge said the lives of his victims’ loved ones had been “shattered”.

On Tuesday, the sisters’ mother Mina Smallman dismissed an apology from the Metropolitan Police after the force’s response to their deaths was found to be below standard.

A report by the Independent Office for Police Conduct (IOPC) found that an inspector closed the police logs after receiving information about the sisters’ possible whereabouts from a family member, but that information was “inaccurately” recorded by a communications supervisor.

This meant that missing persons inquiries for both women were not progressed properly.

In addition, two police constables have been charged with misconduct in public office. They allegedly took “non-official and inappropriate photographs” of the crime scene before sharing them on WhatsApp, and are due to enter a plea next week.

Home Secretary Priti Patel said in a statement on Thursday that “it’s right that questions are being asked within the Met Police right now” with regard to searches for missing people in the wake of the case.