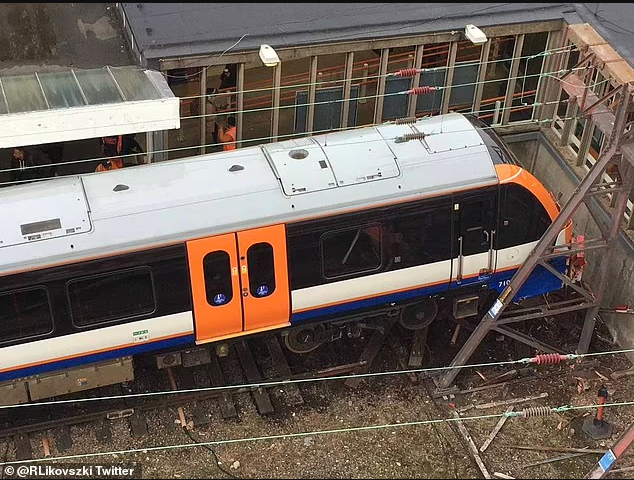 A train driver has been arrested after ‘testing positive for cocaine’ when he crashed a commuter train through the buffers in north London and left two people injured.

The 39-year-old, who has not been named, crashed the eight-carriage London Overground train earlier this month at Enfield Town Station in the north of the capital, at around 8.15am. It had departed from Liverpool Street at around 7.45am.

He was said to be an ‘experienced’ driver however during a routine blood test, it is alleged that traces of cocaine were found.

A source told The Sun: ‘This has caused shock among his colleagues because it’s a very serious incident.

‘Luckily, by the time the train hit the buffers it had slowed down and somehow managed to stay upright.’

The driver was arrested by police this week and held ‘on suspicion of endangering the safety of the railway and being unfit to work on a transport system through drink or drugs’.

He has now been placed on bail until November 19 and is believed to have been suspended by his employers, Arriva Rail London.

At the time of the crash, the driver was said to be in ‘shock’ and two people were treated for ‘minor injuries’

A British Transport Police spokesman said at the time of the incident: ‘Officers were called to Enfield Town at 8.20am following reports of a train hitting the buffer stops at the station.

‘Two people, including the driver, were checked over by paramedics at the scene. As is routine, the driver has been breathalysed and blew negative. We remain on scene while enquiries continue.’

TfL’s general manager for London Overground, Rory O’Neill, described the incident at the time as as a ‘low-speed collision with a buffer’ and said there will be a full investigation ‘to establish how this happened’.

‘The driver is being treated for shock and there are reports of a few minor injuries.’

Under Section 27 of the Transport and Works Act 1992, the driver could face up to six months imprisonment and/or an unlimited fine for being unfit through the use of drink or drugs.