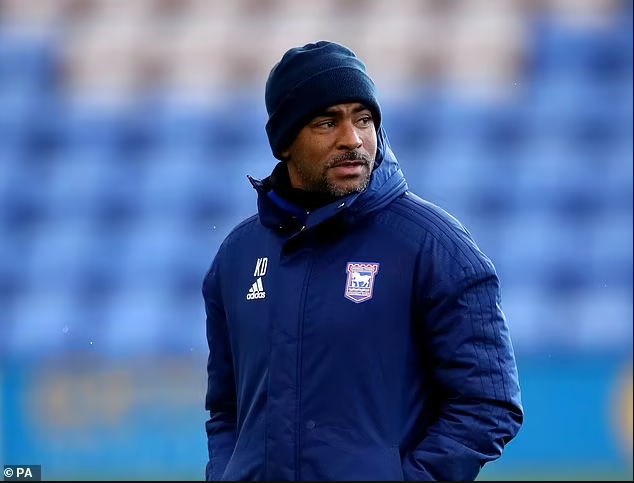 Ex-Newcastle and England footballer Kieron Dyer, 42, reveals he needs an urgent liver transplant after being diagnosed with rare disease

Ex-Newcastle and England footballer, Kieron Dyer has revealed he needs an urgent liver transplant after being diagnosed with primary sclerosing cholangitis.

This comes days after the  42-year-old was hospitalised for tests to establish the cause of his recent health problems.

Now Ipswich Town, where Dyer works as under-23 manager, have confirmed the diagnosis.

Primary sclerosing cholangitis is a rare condition that attacks the bile ducts and can leave them scarred.

A statement released by Ipswich on Sunday morning read: ‘The club can confirm Town U23 manager Kieron Dyer has been diagnosed with primary sclerosing cholangitis.

‘Kieron has been managing problems with his liver for the past couple of years, and now requires a transplant.’

Dyer himself added in the statement: ‘Unfortunately, I was diagnosed with a condition of the liver a couple of years ago, that would lead to me one day needing a transplant.

‘Over the next week, test results will confirm when I need to go through this procedure.

‘I see myself as a very positive person that will overcome this minor setback.

‘I’m very grateful to the Club, the supporters and the general public for their messages of support over the past week.

It came months after he suffered a collapsed lung on TV show Celebrity SAS, also suffering hypothermia and a fractured rib during his appearance on the Channel 4 show.

Speaking afterwards, Dyer said: ‘There were quite a few things to overcome.

‘I’d had hypothermia, and I had a fractured rib, a collapsed lung, and one of my testicles was as big as an apple.

‘When I had my first hospital visit my lung wasn’t picked up. I was about to fly but I didn’t feel quite right and went to hospital again and they spotted it.

‘It was lucky I didn’t get on the plane.’

Dyer revealed that he had to use painkillers to cope with his injuries. He said: ‘I had to mask the pain and pump myself full of paracetamol.’

Why I visited Buhari in Aso Rock on Sunday – Tinubu