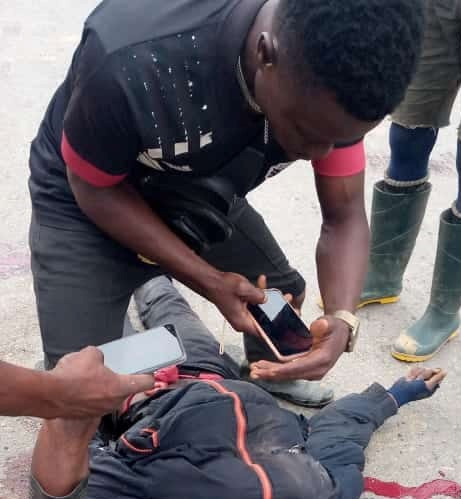 A combined team of security agents have rescued an expatriate who was abducted from a construction site in Bayelsa State.

The kidnappers invaded the construction site at Igbedi/Amassoma Road in Sagbama Local Government Area in a bid to abduct expatriates working on the site on Saturday, October 30.

Spokesperson of the State Police Command, Asinim Butswat, who confirmed the incident in a statement, said the security personnel guarding the construction site killed one of the kidnappers, however, others were able to abduct one of the expatriates and whisked him away through the creeks.

The Joint Task Force (JTF), the Army, the Navy and the Department of State Security (DSS) were reportedly alerted of the incident and immediately swung into action.

The combined team were able to track the kidnappers to the Ogoinbiri waterways where they engaged them in a gun battle that lasted several minutes.

The abducted expatriate was rescued unhurt while some of the kidnappers were inflicted with bullets wounds, though they escaped into the creeks.

“On 30th October 2021, at about 0800 hours, an unspecified number of armed men suspected to be kidnappers stormed a construction site along Igbedi/Amassoma Road, Sagbama Local Government Area, Bayelsa State,” Butswat said in the statement.

“The JTF, Navy, Army and other security agencies were alerted and subsequently, at about 0950 hours, the Navy engaged the kidnappers in a fierce gun battle along Ogoinbiri waterways and rescued the victim unhurt. The kidnappers escaped with varying degrees of bullet wounds. Efforts are being intensified to arrest the fleeing kidnappers

“The Command hereby advises Medical Doctors, other health workers and Native Doctors against the treatment of gunshots wounds without alerting the Police.” he added.

Wizkid drops title and release date of his next album