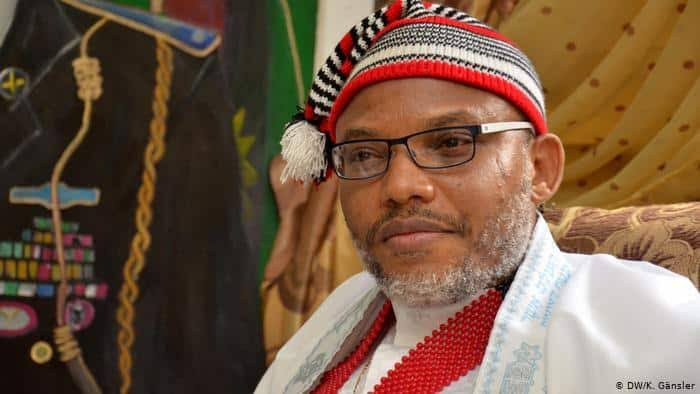 The South East Council of Traditional Rulers and representatives of Igbo Archbishops and Bishops have called on the Federal Government to release the leader of the proscribed Indigenous People of Biafra (IPOB), Mazi Nnamdi Kanu, who has been in the custody of the Department of State Service (DSS) since June and is facing trial for treason.

A statement signed by 12 Igbo traditional rulers and Christian clerics also urged the government to de-proscribe IPOB as a terrorist organisation, saying the move will amount to an act of courage and statesmanship on the part of the Federal Government that will de-escalate the heightened state of insecurity in the South East zone.

“We refer to our earlier request for the release of Mazi Nnamdi Kanu to the South East Council of Traditional Rulers and the Representatives of Igbo Archbishops and Bishops, and restate this call even more strongly. We are of the firm belief that this act of courage and statesmanship is not only imperative but will speedily de-escalate the heightened state of insecurity and dislocation in the South East zone. the statement read

They further called on government to stop military option in the zone.

“We call on the Federal Government to take urgent steps to demilitarise the South East zone, more so as it has become apparent that a continued military siege on the region can only lead to heightened tension, skirmishes and endless bloodletting between the security agencies and our youths. It has become urgent, imperative and compelling to de-emphasize the military option and move towards finding a political solution that will lead to sustainable peace.”

The leaders also stressed that “inequality and marginalisation” remained responsible for youth restiveness in the region.

“As concerned parents, we feel your pain. However, we urge you to de-escalate the tension and remain law-abiding to enable us to engage, especially the Federal Government, in finding a lasting solution to the crises.”

They urged IPOB not to do anything that would hinder or be seen to be hindering the smooth running of the November 6 governorship election in Anambra State.

“Finally, we call on all the candidates in the forthcoming Anambra State governorship election to eschew violence and commit to a free, fair and credible election.”