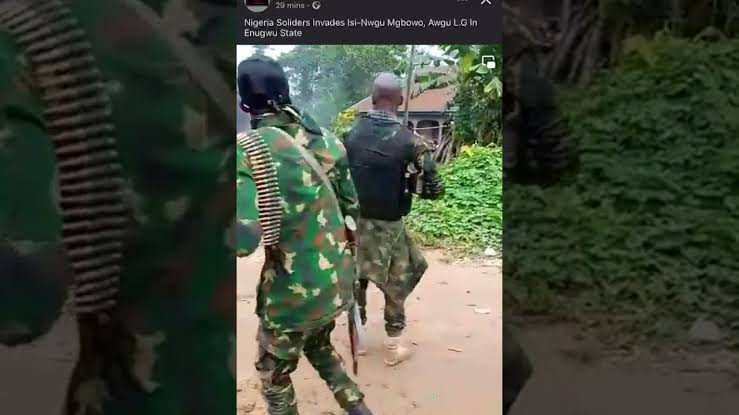 The 82 Division of Nigerian Army, Enugu has denied shooting and burning of houses in Mgbowo Community, Awgu Local Government Area of Enugu State.

This comes after videos circulated online on Monday, November 1 showing Soldiers indiscriminately shooting at civilian homes in the community.

The army, says it only carried out a night raid at a suspected Indigenous People of Biafra/Eastern Security Network (IPOB/ESN) hideout located in the community, and that two ring leaders of IPOB/ ESN were arrested.

This was contained in a statement on Tuesday by the Acting Deputy Director Public Relations, 82 Division Nigerian Army, Major Abubakar Abdullahi, which said the suspects were currently undergoing interrogation .

According to Abdullahi: “Contrary to IPOB/ESN propaganda video, there was no incident of indiscriminate firing or unprovoked burning of houses during the raid. The joint operation in Agwu was conducted in the night and there was no destruction of any private property involved.

“The trending videos in circulation claiming to represent the aftermath of the night operation is not portraying the Agwu operation. It is meant to whip up sentiment and incite the public against the Army”.

The statement added that investigation of the video was ongoing to ascertain when and where it was shot and those involved.

He said any personnel found culpable would be sanctioned accordingly.