Two male adults have been rescued from the rubbles at the scene of the 21-storey building that collapsed at Ikoyi, Lagos state.

It was earlier reported that the building located at off Alexander way, Gerrard Road, Ikoyi, Lagos State, collapsed on Monday, November 1, leaving many trapped under the rubbles. Read here.

While details of the casualties and those trapped inside the building are still sketchy, two men have been rescued by officials of the National Emergency Management Agency (NEMA) this morning, November 2.

Photos and a video of the rescue mission has been shared online. See below, 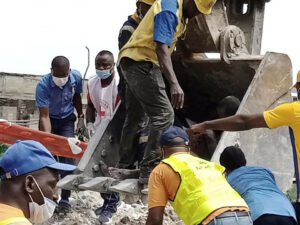 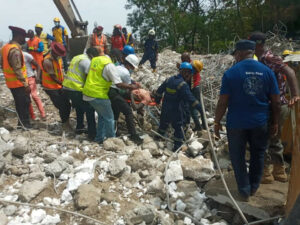 Meanwhile, a young boy has been identified as one of the survivors who escaped unhurt from the Ikoyi building collapse.

According to reports, while the building was collapsing, the boy jumped off it, into another compound.

Ehunoney who shared the photo of the young boy on his page, wrote ;

The guy jumped from the collapsed building into our compound.

There is nothing wrong with marrying a woman richer than you. – Yul Edochie

Criminals lure young ladies to hidden places and kill them