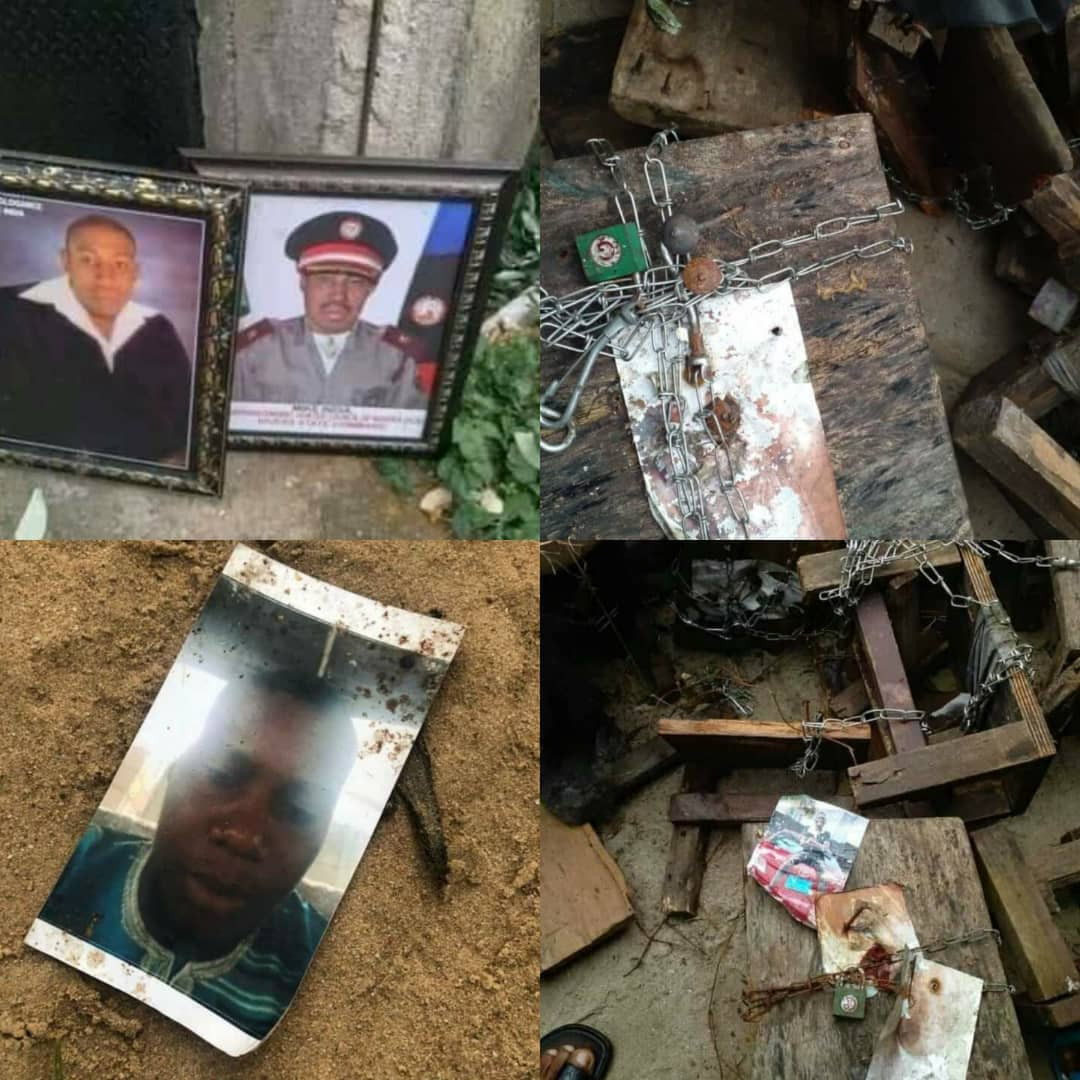 Photos of different men and women “in chains” have been uncovered in a shrine in Rivers state after the native doctor who is originally from Delta state was allegedly caught burying a three-month-old baby alive.

”A Delta State Native/Witch Doctor who lived in Edeoha in Upata Ekpeye was caught burying a 3months old child alive and when confronted and beaten to confess, he disappeared.

On getting to his house/Shrine 100’s of pictures were discovered nailed, tied and chained, to different places.

Padlocks were in chains littered everywhere tied to people’s pictures. The dead 3months old baby was dung up, the angry youths tried all they could to burn down his building in order to set victims in chains free but the building couldn’t catch fire so they broke it down instead. So many items and unimaginable things were found there, and most of those whose pictures were found there are all dead in real life.

The good news is that, most of those blind and with stroke whose pictures were found there have gained their freedom as we speak, the blind can see and those with stroke are perfectly fine.”

A video shared online showed photos of men and women whose photos were ”chained” in the shrine. The youths in the area were said to have pounced on the native doctor, beating him and leaving him with injuries. He was however said to have ”disappeared” after some time.

”Wickedness Of Man to his Fellow man.

Yesterday, a Native Doctor known as Dr Mike Indian was caught while trying to bury a 3 Months old baby Alive in Edeoha,Ahoada in Rivers State.

The angry youths and villagers pounced on him heavily before he disappeared.

As they went to his house, they saw Photographs of people tied, padlocked and nailed in his shrine, most of them who were nailed are suffering strokes in real life.

The Youths Started breaking some of those keys and to the Glory of God, some that were tied in that shrine has started receiving their healing.

A serving Deputy Controller of Prison in Lagos was among those tied in this now broken evil shrine.” Promise Uzoma Okoro, another eyewitness wrote

”We Igbos are used to this”- Cubana Chiefpriests reacts as EFCC arrests his former boss, Obi Cubana