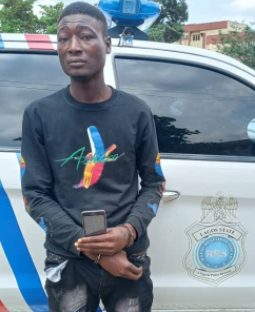 A serial – pickpocket arrested by officials of Lagos State Rapid Response Squad has been sentenced to 4 month imprisonment.

The officers who were on patrol of the area on the directive of the Commander, CSP Olayinka Egbeyemi, intercepted the suspect who did not know he was being monitored by the policemen in plain cloth.

Isiaka disclosed that he visits different parts of the city daily to steal people’s phones and wallets.

On the orders of the State Commissioner, the suspect was charged to mobile court and sentenced to 4 months imprisonment.