Heartwarming moment comedienne, Warri Pikin stormed her husband’s office to apologize to him after a misunderstanding (video)

Comedienne, Real Warri Pikin recently surprised her husband at his office to apologize to him after a misunderstanding.

The on-air personality in a video she shared on social media revealed she and her husband, Ikechukwu had a little misunderstanding a night before and she tried to settle it in bed, but he wouldn’t give in unless she apologized.

According to her, the next morning, her husband left for work without telling her, which was quite unusual. She then decided to surprise him at his office to apologize. 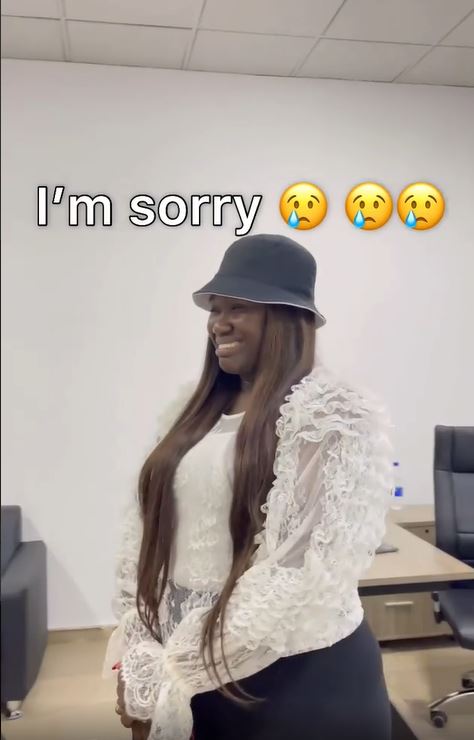 On getting to the office he was not in, so she patiently sat and waited for him. 20 minutes later Ikechuckwu came in and was surprised to see his wife.

She immediately apologized and her husband embraced her.

In other news, popular comedian and media Personality, Anita Asuoha otherwise known as Real Warri Pikin, has taken to her social media page to reveal the reason she married her husband, Ikechukwu, despite the fact that at the time, he was just earning a paltry sum of Thirty thousand Naira.

She shared a throwback photo and revealed that she saw that the future will be better, and that was one of the reason she stuck by his side.

“That year Ikechukwu go say, Anita y me! Anita Are you sure you can Marry a man like me! Anita Y do you love and Respect me sooooooo Much! Anita Na Mararaba I Rent house O! Anita My Salary is 30k I don’t have Anything! Anita I Don’t have a Car! Anita can you manage with me! E NOR KNOW SAY ANITA SEE FUTURE”.

Student who got expelled in her final year over exam malpractice, starts again in a different school and graduates with first class

“I’ll never regret the love I gave, even if it wasn’t reciprocated” – Tonto Dikeh

“You have no right to ask me that question” – Activist, Harrison Gwamnishu tackles policeman who asked him what he does for a living