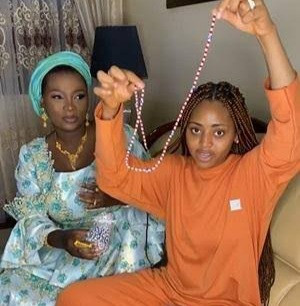 Jaruma replies Regina Daniels; reveals all she did for Regina and her family

Sex therapist and aphrodisiac seller, Jaruma, has responded after she was called out by actress Regina Daniels.

Jaruma and Regina, who have enjoyed a great relationship in the past, going by the videos they shared of each other, had a falling out after it was revealed that Regina’s co-wife, Laila Charani, has divorced from their husband, Ned Nwoko.

A number of people who reacted to the divorce credited the power of Jaruma’s product as they insinuated Regina used the kayanmata products to have Ned all to herself.

Regina then released a statement, accusing Jaruma of using the incident to promote her “selfish desires”.

“I will not tolerate Jaruma using this issue that practically portrays me as a bad person for her selfish desires knowing fully well I have never and will never use whatever she sells as I have no reason to.”

Regina insisted that despite influencing for Jaruma’s brand and posting the products on her Instagram,  she has never used it.

She also accused Jaruma of using every opportunity to create content to profit off her even after their deal expired.

In response, Jaruma accused Regina of collecting 10 million Naira to influence for her brand only to post just 3 times in 6 months.

She added that she had to return to Nigeria from Dubai to get Regina to begin posting her products based on their agreement.

Jaruma then went further to list all the monetary gifts she has given to Regina and her family.

Read her response below.

Reality TV star, Erica reveals what would happen to Italian TikToker, Khaby Lame, if he was a Nigerian